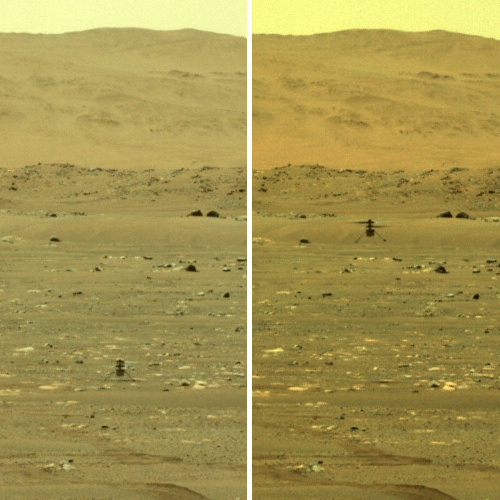 The first autonomous flight of the helicopter Ingenuity on Mars successfully took place early this morning, according to JPL engineers.

NASA has pulled off the first powered flight on another world. Ingenuity, the robot rotorcraft that is part of the agency’s Perseverance mission, lifted off from the surface of Mars on 19 April, in a 40-second flight that is a landmark in interplanetary aviation. “We can now say that human beings have flown a rotorcraft on another planet,” says MiMi Aung, the project’s lead engineer at the Jet Propulsion Laboratory (JPL) in Pasadena, California.

As shown by the two images taken by Perseverance above, the first flight was very simple. The helicopter simply rose about 10 feet, hovered for about 30 seconds as it swiveled 90 degrees, and then carefully descended back down. I have also embedded the video that JPL scientists have created compiling by high resolution Perseverance images below the fold.

Four more flights will next be attempted in the coming weeks.

Four further flights, each lasting up to 90 seconds, are planned in the coming weeks. In these, Ingenuity is likely to rise up to 5 metres [16 feet] above the surface and travel up to 300 metres [1000 feet] from the take-off point. Each successive flight will push Ingenuity’s capabilities to see how well the drone fares in Mars’s thin atmosphere, which is just 1% as dense as Earth’s.