NASA and the Perseverance engineering team announced yesterday their specific plans for the first flights oft he Ingenuity helicopter, setting the flight date as no earlier than April 8th.

They are presently driving Perseverance to its “airfield,” a 33×33 foot area. The deployment then will take six days, because there are a number of steps involved to position and place the helicopter on the ground properly.

Once the team is ready to attempt the first flight, Perseverance will receive and relay to Ingenuity the final flight instructions from JPL mission controllers. Several factors will determine the precise time for the flight, including modeling of local wind patterns plus measurements taken by the Mars Environmental Dynamics Analyzer (MEDA) aboard Perseverance. Ingenuity will run its rotors to 2,537 rpm and, if all final self-checks look good, lift off. After climbing at a rate of about 3 feet per second (1 meter per second), the helicopter will hover at 10 feet (3 meters) above the surface for up to 30 seconds. Then, the Mars Helicopter will descend and touch back down on the Martian surface.

Several hours after the first flight has occurred, Perseverance will downlink Ingenuity’s first set of engineering data and, possibly, images and video from the rover’s Navigation Cameras and Mastcam-Z. From the data downlinked that first evening after the flight, the Mars Helicopter team expect to be able to determine if their first attempt to fly at Mars was a success.

The data from this first attempt will determine what they do next.

UPDATE: Below the fold is an illustration of that planned first flight, showing that they hope to send the rover toward the north, take some images, and then fly it back to its airfield, with a second landing site option at the far end of its flight. 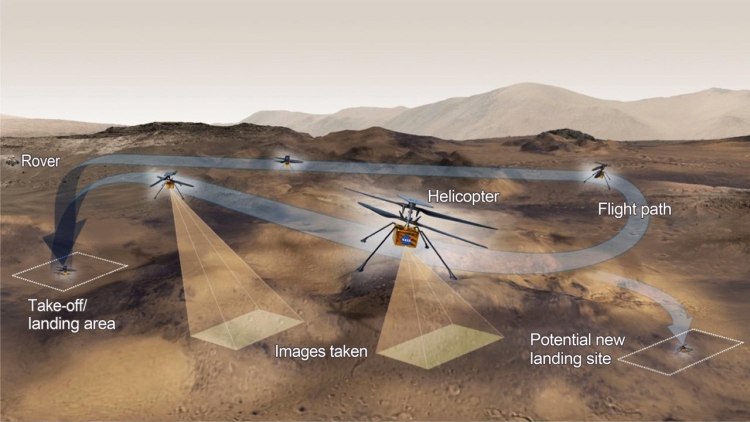