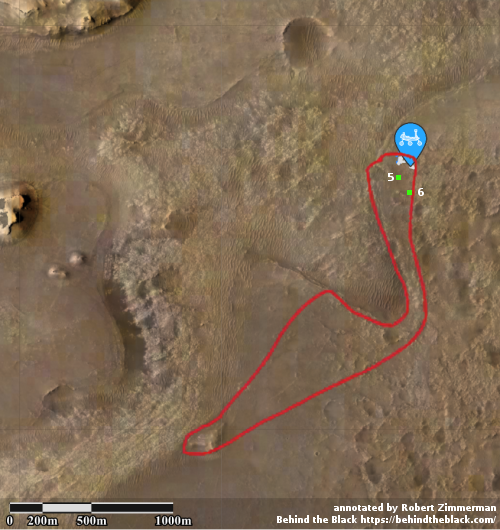 The Ingenuity engineering team announced today that the Mars helicopter will make its sixth flight next week, flying to a new landing spot while taking images for the Perseverance science team.

Ingenuity’s flight plan begins with the helicopter ascending to 33 feet (10 meters), then heading southwest for about 492 feet (150 meters). When it achieves that distance, the rotorcraft will begin acquiring color imagery of an area of interest as it translates to the south about 50-66 feet (15-20 meters). Stereo imagery of the sand ripples and outcrops of bright rocks at the site will help demonstrate the value of an aerial perspective for future missions. After completing its image collection, Ingenuity will fly about 164 feet (50 meters) northeast where it will touch down at its new base of operations (known as “Field C”).

The flight will attempt a new speed record of 9 mph, and will also land for the first time in a spot that the helicopter has not scouted beforehand. It will instead be using data from high resolution images from Mars Reconnaissance Orbiter (MRO) combined with its own hazard avoidance system.

Ingenuity will essentially place itself over and in an area where Perseverance plans to go, leapfrogging ahead flight by flight, as shown by the map above (annotated by me from the map available here). The green dot numbered 5 shows the helicopter’s present position, while #6 shows its approximate landing spot after its sixth flight. Perseverance, whose present location is indicated by the blue marker, is generally heading south within the area outlined by the red line, as described during the science team’s an April 30th press conference. The goal in exploring this region is to gain a very robust geological baseline of the floor of Jezero Crater, which scientists believe will be the oldest material the rover should see in its travels.