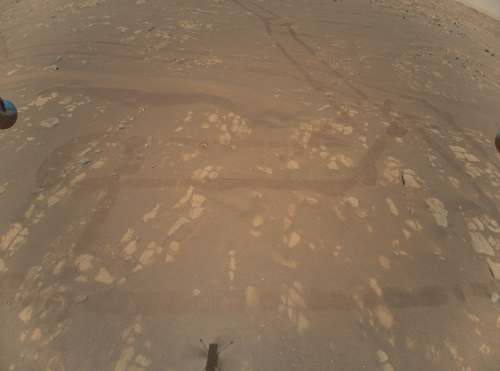 For the third flight, we’re targeting the same altitude [as flight two], but we are going to open things up a bit too, increasing our max airspeed from 0.5 meters per second to 2 meters per second (about 4.5 mph) as we head 50 meters (164 feet) north and return to land at Wright Brothers Field. We’re planning for a total flight time of about 80 seconds and a total distance of 100 meters (330 feet).

While that number may not seem like a lot, consider that we never moved laterally more than about two-pencil lengths when we flight-tested in the vacuum chamber here on Earth. And while the 4 meters of lateral movement in Flight Two (2 meters out and then 2 meters back) was great, providing lots of terrific data, it was still only 4 meters. As such, Flight Three is a big step, one in which Ingenuity will begin to experience freedom in the sky.

The picture above was the first color image sent down by Ingenuity, taken during the second test flight when the helicopter was seventeen feet in the air and pitched slightly so that it could look east, toward Perseverance. From the caption:

The data from tonight’s flight will arrive on Earth at around 7:16 am (Pacific) tomorrow.