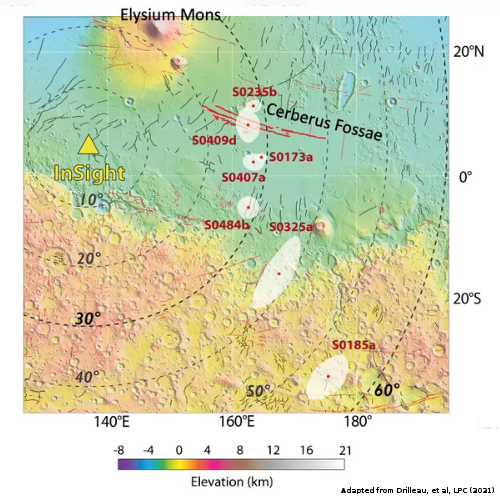 According to a JPL press release today, the seismometer on the Mars lander InSight detected two new 3+ magnitude quakes in March, both coming from the Cerberus Fossae region, the same region where the bulk of seismic activity has so far been pinpointed on Mars.

The map to the right was presented several weeks ago at the 52nd Lunar and Planetary conference, and could possibly include one of these two new quakes. The timing however of these March quakes is significant:

The new quakes have something else in common with InSight’s previous top seismic events, which occurred almost a full Martian year (two Earth years) ago: They occurred in the Martian northern summer. Scientists had predicted this would again be an ideal time to listen for quakes because winds would become calmer. The seismometer, called the Seismic Experiment for Interior Structure (SEIS), is sensitive enough that, even while it is covered by a dome-shaped shield to block it from wind and keep it from getting too cold, wind still causes enough vibration to obscure some marsquakes. During the past northern winter season, InSight couldn’t detect any quakes at all.

They are beginning to use the lander’s scoop to cover the seismometer and its communications tether with sand to protect both from the wind and temperature fluctuations. Once done they hope to be able to detect quakes during the entire Martian year, though this ability will be further limited by a reduction in power.

Despite the winds that have been shaking the seismometer, InSight’s solar panels remain covered with dust, and power is running lower as Mars moves away from the Sun. Energy levels are expected to improve after July, when the planet begins to approach the Sun again. Until then, the mission will successively turn off the lander’s instruments so that InSight can hibernate, waking periodically to check its health and communicate with Earth. The team hopes to keep the seismometer on for another month or two before it has to be temporarily turned off.