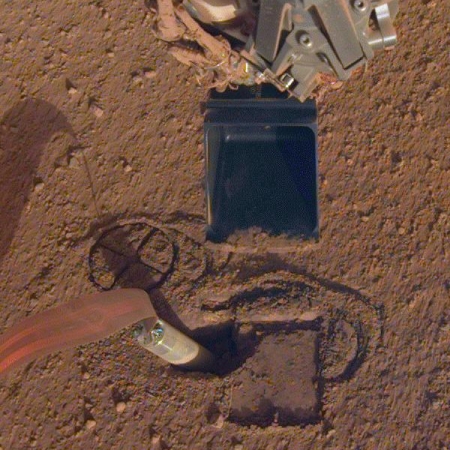 In their effort to solve the issues that have prevented InSight’s mole from penetrating more than fourteen inches into the ground on Mars, engineers now plan to use the scoop on the robot arm to “pin” the mole up against one wall of the hole so that it will have the friction necessary to drill downward.

The image to the right, cropped and reduced to post here, illustrates what they have been doing and what they will do. Previously the hole was much larger, which prevented the mole from moving downward because it needed the friction from the material around it to hold it in place after each hammer action. (Think of pounding a nail into a wooden board: The nail is gripped tightly by the wood around it as it goes down, so that after each hit it goes further in.)

Since June they have been using the arm and scoop to fill in the hole around the mole. Now I think they intend to bring the scoop around to the mole’s left side, as shown in the image, and pin it upright against the right wall of the hole. When it resumes hammer-drilling they hope both the wall and the scoop will provide enough friction for the mole to drill downward.