InSight’s mole has popped out of its hole
October 28, 2019 at 8:35 am Robert Zimmerman Points of Information 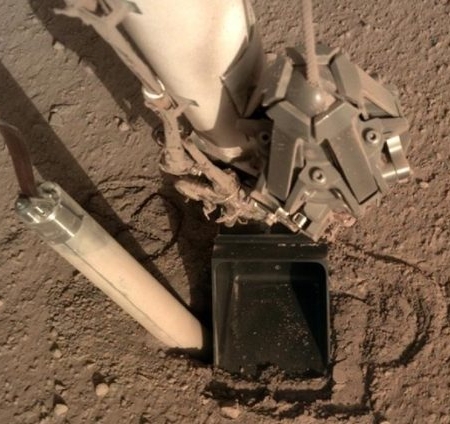 In a setback for its renewed digging effort, the mole drill on InSight has apparently bounced out of its drilled hole during the most recent drilling, soon after engineers had increased the rate of hammer strokes.

The image to the right shows the mole, the white cylinder on the left, with the scoop of the robot arm mostly covering the hole in its effort to pin the mole in position.

“While digging this weekend the mole backed about halfway out of the ground,” the mission announced via a pair of tweets Oct. 27. “Preliminary assessment points to unexpected soil properties as the main reason.”

…The mission added that one possibility is soil is falling in front of the mole, filling the hole. “Team continues to look over the data and will have a plan in the next few days.”

Without question the alien and fluffy properties of the soil appears to be the problem. Based on how the mole is leaning, I wonder if the left wall of the hole began to widen and collapse, as had the rest of the hole during initial drilling, thus defeating the purpose of the robot arm’s effort to pin the mole in place.