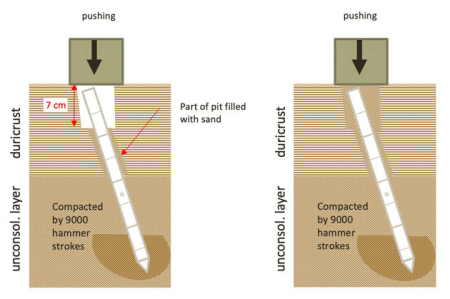 The engineering team for InSight’s German-built digging tool, dubbed the mole, yesterday reported that it is once again no longer driving into the ground.

Previously they had been able to make progress by having InSight’s scoop press down on the mole. Once the top of the mole however was below ground, the scoop could no longer provide that support, and at that point the mole began bouncing again with each hammer-stroke, the surrounding Martian dirt unable to provide the friction to hold the mole down.

As shown by the illustration above, they are now going to try using the scoop to fill the hole and then use the scoop to press down on the dirt, with the hope this will provide the structural friction required to hold the mole in place after each hammer stroke. This effort will take time, and will prevent the scoop from doing its other work. They are therefore taking a pause until August before beginning the hole-filling operation.