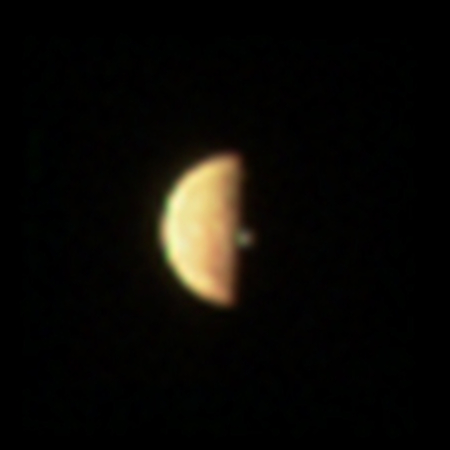 Using several instruments, the Juno science team has successfully photographed an active volcano plume in Io’s polar regions. Two instruments measured the plume’s heat and radiation. Juno’s cameras meanwhile took the color image on the right. The bright spot on Io’s night side matches the location of the heat and radiation signatures from the other instruments.

JunoCam acquired the first images on Dec. 21 at 12:00, 12:15 and 12:20 coordinated universal time (UTC) before Io entered Jupiter’s shadow. The Images show the moon half-illuminated with a bright spot seen just beyond the terminator, the day-night boundary. “The ground is already in shadow, but the height of the plume allows it to reflect sunlight, much like the way mountaintops or clouds on the Earth continue to be lit after the sun has set,” explained Candice Hansen-Koharcheck, the JunoCam lead from the Planetary Science Institute.

This image is not the first time a spacecraft has caught an active volcanic plume on Io. In fact, practically the very first good images of Io during the Voyager 1 fly-by did this, confirming then that volcanoes are active on the Jupiter moon.

What this image further confirms however is how active Io really is. Volcanoes erupt there so continuously that it apparently isn’t that hard to catch one as it happens.