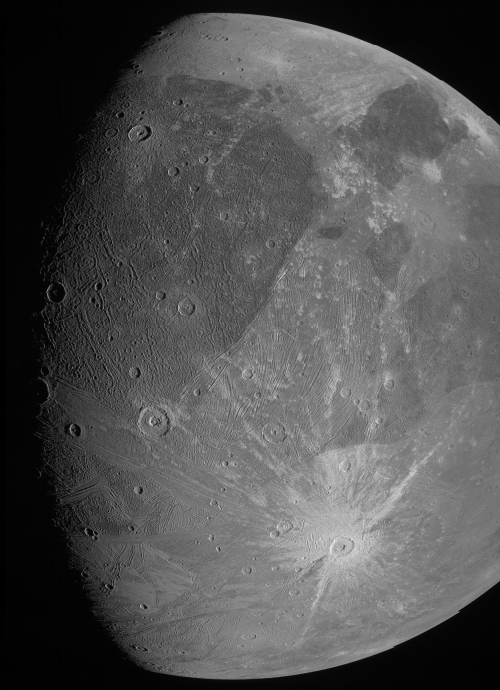 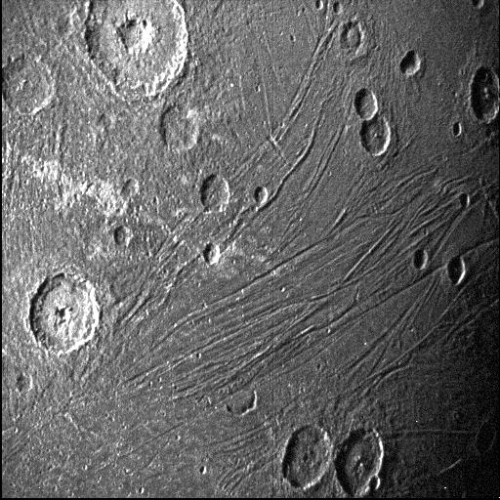 On June 7th the Jupiter orbiter Juno made its first close fly-by of Ganymede, taking the first close-up images of this Jupiter moon since the orbiter Galileo flew past in 2000.

The first two images from NASA Juno’s June 7, 2021, flyby of Jupiter’s giant moon Ganymede have been received on Earth. The photos – one from the Jupiter orbiter’s JunoCam imager and the other from its Stellar Reference Unit star camera – show the surface in remarkable detail, including craters, clearly distinct dark and bright terrain, and long structural features possibly linked to tectonic faults.

…Using its green filter, the spacecraft’s JunoCam visible-light imager captured almost an entire side of the water-ice-encrusted moon. Later, when versions of the same image come down incorporating the camera’s red and blue filters, imaging experts will be able to provide a color portrait of Ganymede. Image resolution is about 0.6 miles (1 kilometer) per pixel.

In addition, Juno’s Stellar Reference Unit, a navigation camera that keeps the spacecraft on course, provided a black-and-white picture of Ganymede’s dark side (the side opposite the Sun) bathed in dim light scattered off Jupiter. Image resolution is between 0.37 to 0.56 miles (600 to 900 meters) per pixel.

Both images are to the right, each slightly reduced to post here. These images of this moon of Jupiter, the largest moon in the solar system and about 26% larger than the planet Mercury, reveal many of the same unsolved geological mysteries uncovered when the Galileo orbiter photographed it two decades ago. As I wrote in my Chronological Encyclopedia

Closer inspection of Ganymede revealed a strange topography, including patches of grooved terrain (not unlike the surface of a vinyl record) overlaying other patches of grooved terrain, the different patches oriented in random and totally unrelated directions. Moreover, the surface is overlain by bright and dark patches (the bright patches thought to be caused by water frost) that often had no apparent correspondence to topographical features. Planetary geologists could only scratch their heads in wonderment.