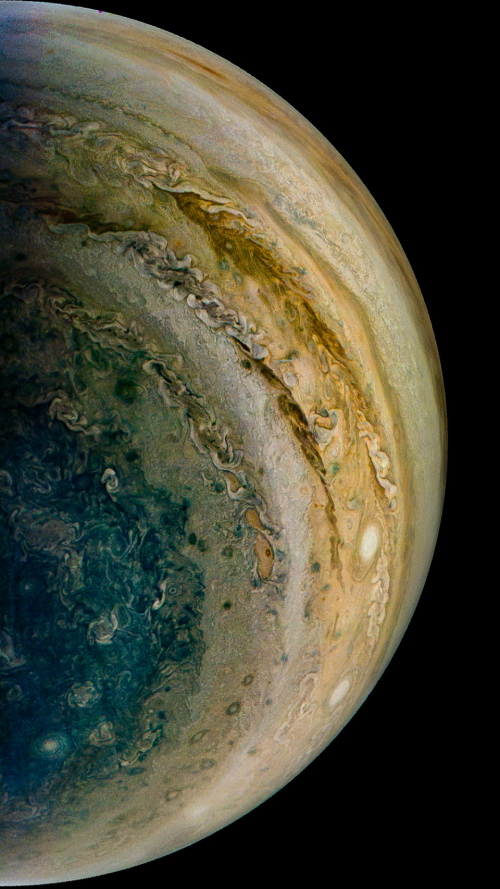 Cool image time! The photo to the right shows the southern polar regions of Jupiter. The image, taken by Juno during its 29th close-fly of Jupiter, was enhanced by a citizen scientist who only goes by the nickname Flury-21. This in fact was this person’s first try at enhancing a Juno image. He or she did a nice job, but provided no additional information other than saying that he “used lightroom to enhance the image and mostly used the dehaze effect.”

Works nicely nonetheless to illustrate how the bands that dominate Jupiter’s equatorial and mid-latitude regions disappear at the pole. Instead, the pole is a region of chaotic independent hurricanes, many bigger than North America. Other images from Juno suggest that they change relatively quickly. For example, compare this image of the south pole with an earlier one taken during the 28th fly-by. While we might not be looking at the same hemisphere, it is hard to believe there is no overlap between both images. Yet I can find no corresponding features.

The two images of course were taken months apart, and thus it is not surprising the storms have changed completely. However, I also suspect, given their size, that even over this time span some storms have survived, but changed so much it is hard to link them together. The only way to do this would be to have an orbiter close enough all the time to make movies. Unfortunately, Juno cannot do this, and I don’t expect any orbiter like this to reach Jupiter for many decades.