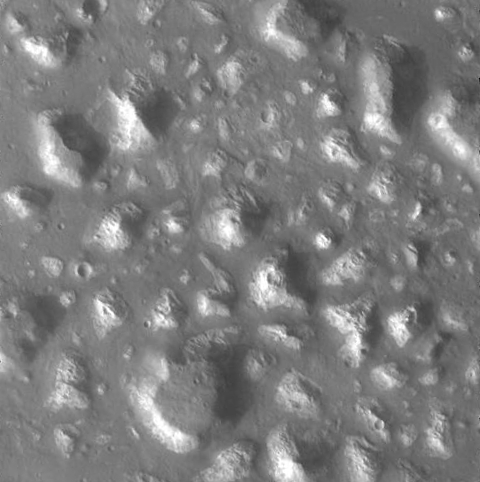 Cool image time! The Mars Odyssey science team today released the image on the right, cropped and rotated to show here, of a region on Mars named “Ariadnes Colles.”

The term colles means hills or knobs. The hills appear brighter than the surrounding lowlands, likely due to relatively less dust cover.

This is certainly a place with lots of hills, or to be more precise, mesas, as many of them seem to be flat topped.

The lack of dust cover on the tops is probably because, like on Earth, the winds blow much better once you get a bit above the surface. (This is why sailing ship builders kept adding higher and higher sails to their ships, until the top sails of clipper ships rose a hundred-plus feet above the deck.) These better winds clean off the mesa tops, just as they did to the solar panels on the rovers Opportunity and Spirit several times during their long missions.

Ariadnes Colles is another example of Martian chaotic terrain. Since this region is located deep in the cratered and rough southern highlands of Mars, the erosion that created these mesas was likely not water-flows. Was it wind? Ice?

Your guess is as good as anyone’s.