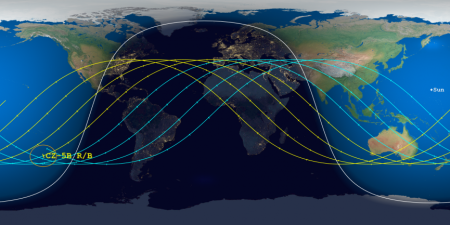 According to estimates this morning by the Aerospace Corporation, the 21-ton core stage of China’s Long March 5B rocket will come crashing down to Earth sometime on May 10th, plus or minus 41 hours.

Their map to the right illustrates all the orbits that will take place during that time period, which in turn shows all the possible places that core stage might land. For example, though the center point in that time period puts the stage down in the Pacific west of South America, should it go down just a little more than two orbits later it will then be crossing over the entire continental United States, with even a very slim chance it could land on my own house in Arizona! If it should come down a little early instead it could land on Europe, the Middle East, India, or Australia.

This estimate is very very uncertain, and will be refined in the days ahead, though because of the chaotic nature of decaying orbits it will be impossible to refine it to less than half an orbit, even on the day of its return.

Nor can anyone do anything about it. Large sections of this big piece of hardware is going to hit the ground in an uncontrolled manner. And China, a signatory to the Outer Space Treaty which forbids exactly this sort of uncontrolled reentry, launched it anyway.