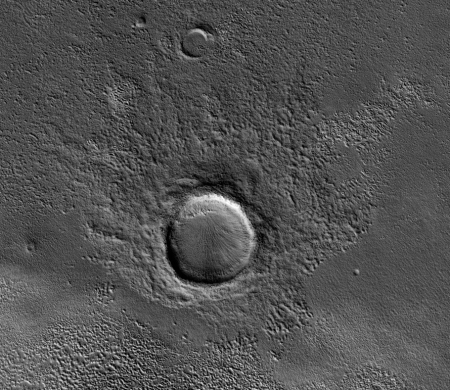 Cool image time! The image on the right, reduced and cropped to post here, comes from the December image release from the high resolution camera of Mars Reconnaissance Orbiter (MRO). (If you click on the image you can see the full resolution uncropped photograph.) Released without a caption, the release itself is intriguingly entitled, “Crater with Preferential Ejecta Distribution on Possible Glacial Unit.

The uneven distribution of ejecta material around the crater is obvious. For some reason, the ground was preferentially disturbed to the north by the impact. Moreover, the entire crater and its surrounding terrain look like the impact occurred in a place that was saturated somewhat with liquid, making the ground soft like mud.

That there might have been liquid or damp material here when this impact occurred is reinforced by the fact that this crater is located in the middle of Amazonis Planitia, one of the larger regions of Mars’ vast northern lowland plains, where there is evidence of the past existence of an intermittent ocean.

This however really does not answer the question of why most of the impact’s ejecta fell to the north of the crater. From the release title is appears the planetary geologists think that this uneven distribution occurred because the impact occurred on a glacier. As the ground has a lighter appearance just to the south of the crater, I suspect their reasoning is that this light ground was hard bedrock while the darker material to the north was that glacial unit where the ground was more easily disturbed.

This is a guess however (a common requirement by anyone trying to explain the strange features so often found on the Martian surface). Other theories are welcome of course, and could easily be correct as well.