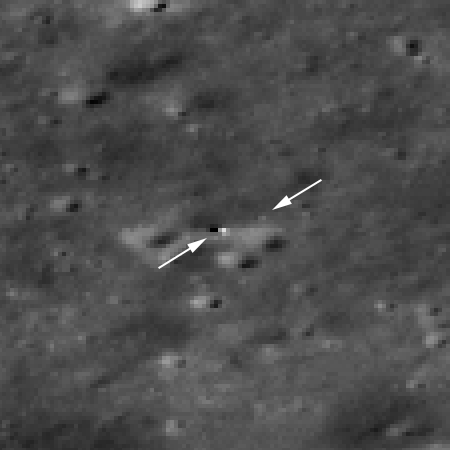 The Lunar Reconnaissance Orbiter (LRO) science team has now released a second and closer image of Chang’e-4’s location on the far side of the Moon, which now also shows the nearby rover Yutu-2.

The two arrows in the image to the right, cropped to post here, show both. The rover is the dot on the right, with the lander to the left, both just beyond the arrow tips. Both are very small, with Yutu-2 for example only two pixels across. Still, with both you can see their shadows, equally small, to the left of both bright dots. With sunlight coming from the right, all the craters, which are recessed, have their shadows on the right. The spacecraft, sticking up from the surface, have shadows going to the the left.

As Yutu-2 continues its travels, LRO will likely take more images, allowing us to track it even if the Chinese provide limited information.