Mars: A small volcano at the base of a big volcano
August 18, 2020 at 1:31 pm Robert Zimmerman Points of Information 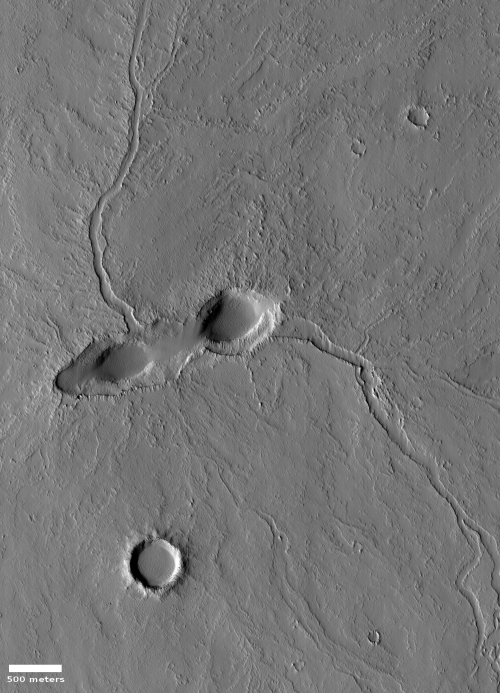 MRO took a previous picture of this vent back in 2010, when they labeled it instead a “small volcano.” Both labels are essentially correct. The two depressions here clearly were a vent for lava at some point in the past. The depressions also fit the definition of a small volcano, as they sit at a high point with two rills flowing down from them. In some ways they could be considered small calderas at the top of a volcano. 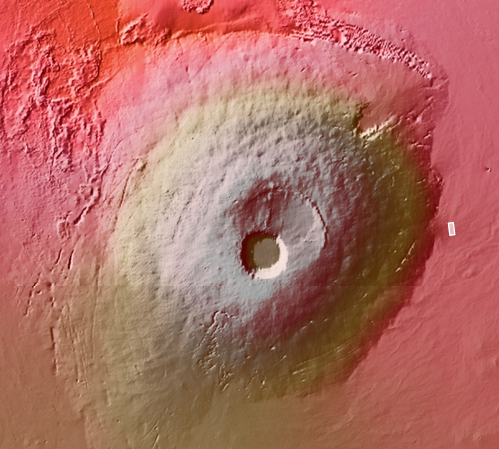 The overview map to the right shows where this vent, as indicated by the white rectangle, sits next to Pavonis Mons, the fourth tallest volcano on Mars at about 47,000 feet elevation. The vent sits about 30,000 feet below the peak.

I find it a little hard to imagine what it must have been like when this volcanic region was active. Were both the main caldera on top of Pavonis Mons erupting at the same time as this vent, so far down below the top? Or did this tiny volcano grow and vent after the big volcano had finally settled down? Or could it have vented first, and then died off when the big volcano began to grow afterward?

MRO has not taken many high resolution images in this region, so we need to look at lower resolution survey images to get a better sense of the region’s overall geology and its history.

MRO’s context camera took a wider image of this location, as shown on the right, rotated, cropped, reduced, and darkened to post here.

The black arrow notes the vent’s location. To the northwest can be seen a number of criss-crossing straight depressions that resemble rills. Many are probably drainage paths and vents for lava coming out of the Pavonis Mons. Some might be cracks that formed as the flanks of this mountain settled. In fact, this area of rills and depressions appears to distinctly slope upward towards Pavonis Mons’ peak to the west.

What makes these depressions interesting is how they appear to stop suddenly. The plain to the south and east looks as if it was a later sea of lava, laid down on top of an older slope, with its edge a lava shoreline at the base of the sloped depression area.

The vents to the south appear to be at the top of a north-south trending hill, its elevation rise barely discernible. The two rills flowing away from these vents in the top image above help define the slope of this faint hill, which also reinforces the label of this vent as being “a small volcano.” The entire terrain also suggests that the vent itself laid down this sea of lava after Pavonis Mons had grown, with that sea then burying the mountain’s base at this point.

The vent thus appears to have spewed lava after Pavonis Mons formed, though it still could be that lava was oozing from both the small volcano as well as the big mountain’s slope to the west at the same time, with both contributing to the creation of this lava plain.

More data and some in situ research however will be required to pin down this history more precisely. For example, if the vent and the depressions to the northwest were both erupting at the same time, was the peak of Pavonis Mons, 30,000 feet higher up, also venting at that time? It boggles the mind to imagine volcanic activity across so wide a range of elevations, but without better data taken on site, no strong conclusions are possible.

Who wants to go?