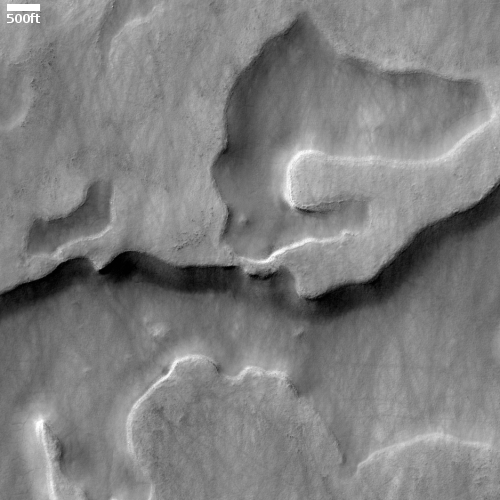 Cool image time! The photo to the right, rotated, cropped, and reduced to post here, was taken on November 29, 2020 by the high resolution camera on Mars Reconnaissance Orbiter (MRO). Labeled simply as “periglacial survey,” it is one of almost two hundred such images taken by MRO over the years, almost all of which are in the high latitudes above 60 degrees, with most being in the southern hemisphere. Most appear to be close to or above Mars’s Arctic Circle, which means these are locations that will see little or no sunlight for a portion of the year.

I have been unable to contact the scientists doing this survey, so I will have to make an educated guess as to its purpose and goals. “Periglacial” refers to the outer fringes or margin of a glacier or large ice sheet. Thus, in the context of this survey, the scientists appear to be studying places where they think the Martian high latitude ice sheets are beginning to sublimate away. Today’s photo is a good example. It is located at 67 degrees south latitude, in the southern cratered highlands but in an area that appears to be relatively free of craters. Instead, the terrain appears somewhat flat with only periodic depressions and scarps. The MRO context camera photo below of the same area, rotated, cropped, and expanded to post here, illustrates this.

The black box marks the area covered by the close-up photo. As you can see, what looked like an east-west channel in the close-up was merely a longer enclosed depression.

In fact, the whole region reminds me of what you see if you finely spray hot water on a sheet of ice. Patches begin to melt away randomly, producing holes and depressions.

In the close-up one also gets the strong sense that everything here is either frozen ice or is dust and dirt that is impregnated within it, so much so that everything has become smoothed as the ice has gone through numerous cycles of freezing and sublimation over the eons. There are no dunes, and though the dark streaks indicate dust devil tracks there certainly appears to be little surface dust.

The photo and its features, as well as this entire periglacial survey, strongly invokes a vision of a very icy Mars in its high latitudes. While scientists have found many glacial features in the latitude bands from 30 to 60 degrees latitude, what this photo suggests is that at higher latitudes the ground is almost entirely covered by an ice sheet.

As I’ve said before, Mars is a desert like Antarctica, icy, cold, and very dry. In building future colonies that coldest place on Earth probably gives us the best analogy for the environment on Mars.