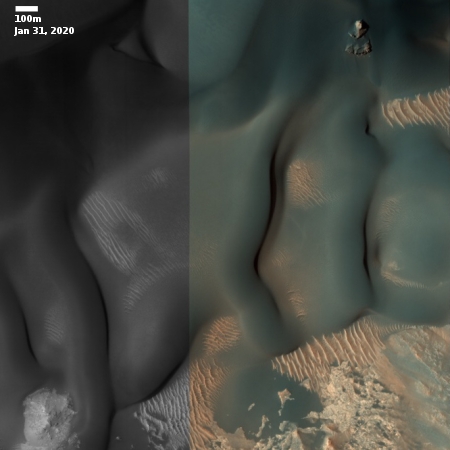 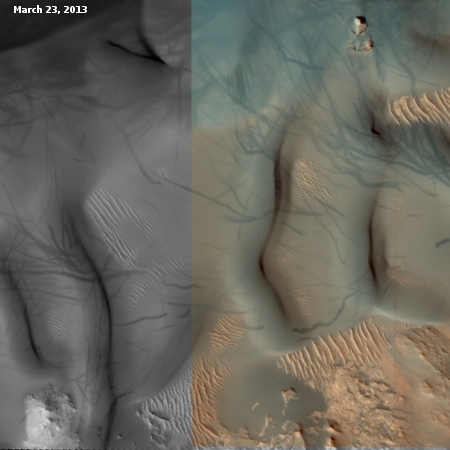 Cool image time! To understand what created the vastly strange and alien Martian surface, it will be necessary for scientists to monitor that surface closely for decades, if not centuries. To the right is one small example. Taken by the high resolution camera of Mars Reconnaissance Orbiter (MRO) and rotated, cropped, and reduced to post here, it shows a dune field inside a crater in the southern cratered highlands of Mars. Craters have been found to be great traps for dust and sand on Mars. Once the material is blown inside, the winds are not strong enough to lift the material out above the surrounding rims. Thus you often get giant dunes inside craters, as we see here.

What makes this location of interest to planetary scientists is the changing surface of these dunes. They have been monitoring the location since 2009. In 2013, the MRO science team released a captioned photograph, the second image to the right, also rotated, cropped, and reduced by me to match the same area in the top image. In that caption planetary scientist Corwin Atwood-Stone of the Lunar and Planetary Laboratory in Arizona wrote,

This area was previously imaged in August 2009, about two Mars years ago, and in that image dust devil tracks were also visible. However the tracks visible now are completely different from the earlier ones. This tells us that there has been at least one dust storm since then to erase the old tracks, and lots of dust devil activity to create the new ones.

Since then the MRO science team has taken repeated images of this location to monitor how the dust devil tracks change, as well as monitor possible changes to the dunes themselves, including avalanches. The newest image above shows the result of the global dust storm last year. It wiped out the dust devil tracks entirely.

The newer image was entitled, “Monitor Dune Avalanche Slopes,” but I couldn’t find any examples. Based on published research, I am sure there is something there, even if I couldn’t find them. Maybe my readers have a better eye than I.