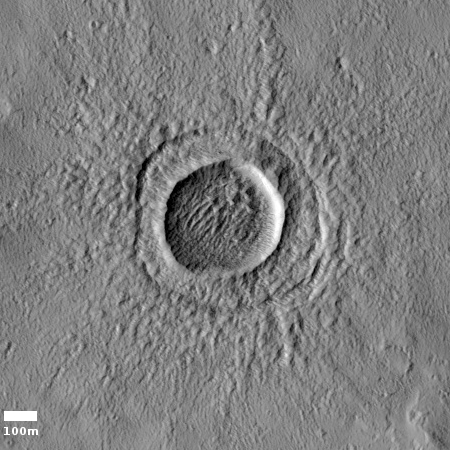 Cool image time! The photo on the right, cropped to post here, was taken by the high resolution camera on April 23, 2019. It shows a quite intriguing impact crater on the northern lava slopes of Pavonis Mons, the middle volcano in the chain of three gigantic volcanoes to the west of Valles Marineris.

What makes this image cool is what the impact did when it hit. Note the circular depression just outside the crater’s rim. In the southeast quadrant that ring also includes a number of additional parallel and concentric depressions. Beyond the depression ground appears mottled, almost like splashed mud.

What could have caused this circular depression? Our first clue comes from the crater’s location, as shown in the overview map below and to the right. 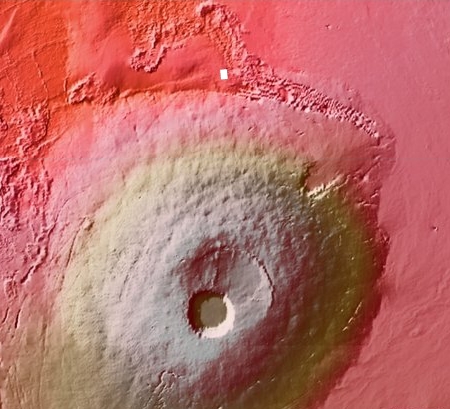 The white box indicates the location of this crater north of Pavonis Mons. From this overview, it appears that the bolide landed on a giant lava flow that to my eye was seeping out of the base of the volcano’s steeper flanks. This flow also appears to be younger than the surrounding terrain, as it seems to have overlaid and filled ground that would have been similar to the rough parallel cracks to its immediate east.

My guess is that the impact that formed this crater occurred during or near the end of this colossal lava flow. The surface had solidified into a hard and somewhat thick crust, with still hot and molten lava below. When the bolide hit it cracked the crust, but because the crust was thick it did not break into many pieces with many cracks, but instead broke in one piece, a disk that was pushed downward into the softer molten lava below. Think of a bullet hitting a bullet-proof material, as in these two examples here and here.

The disk and crater are not lower than the surrounding terrain because after hitting that liquid lava layer below they would have rebounded. The impact however pushed that lava below outward to form the radiating skirt beyond the circular depression.

It is also possible that the impact hit after the lava was solid, but with two layers of different structural strengths. The top layer was stronger, and broke in the manner I just described. The lower level in turn was melted by the heat of impact, and then produced the features as outlined.

All a guess on my part, as an amateur geologist with only a dangerous smattering of knowledge of Earth-based geology. On Mars, in its lighter gravity with different chemistries, things could be very different. Either way, the feature suggests that the lower layers here were either less dense, more porous, or had voids. All intriguing possibilities.

One last detail: The parallel ridges inside the crater are probably dunes, as craters on Mars tend to be sand traps, capturing dust over time. The wind then reshapes them into dunes, but the dust has trouble escaping so it begins to pile up.

Or not. There appears to be a break in the crater’s north rim where these ridges are largest and most pronounced. Maybe instead these ridges represent some sort of lava flow, related to that break. The image’s resolution is not good enough to clarify this, so your guess is as good as mine.