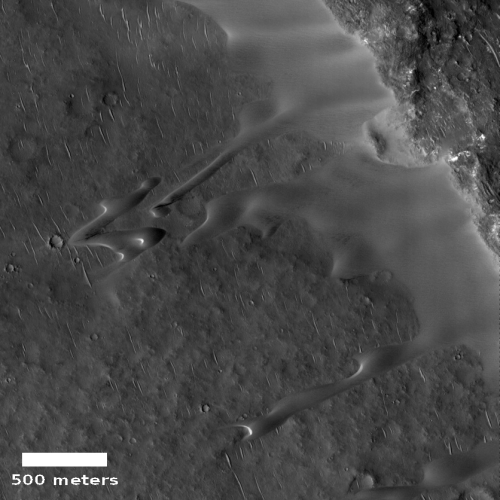 Cool image time! The photo to the left, rotated, cropped, and reduced to post here, was taken on June 23, 2020 by the high resolution camera on Mars Reconnaissance Orbiter (MRO). I was attracted by the uncaptioned image’s title, “Elongating Linear Dunes at Meroe Patera.” What are elongating linear dunes?

The photo shows two such dunes, stretching out to the southwest away from the pile of sand that abuts the cliff to the northwest. Unlike most dunes, which usually form and travel in groups, these for some reason form single straight lines extending for some distance.

I contacted the scientist who requested this image, Joel Davis of the Natural History Museum in London, hoping he could answer some questions about these strangely shaped dunes, and discovered that he was studying this exact subject for a paper since published. As noted in the paper’s introduction, 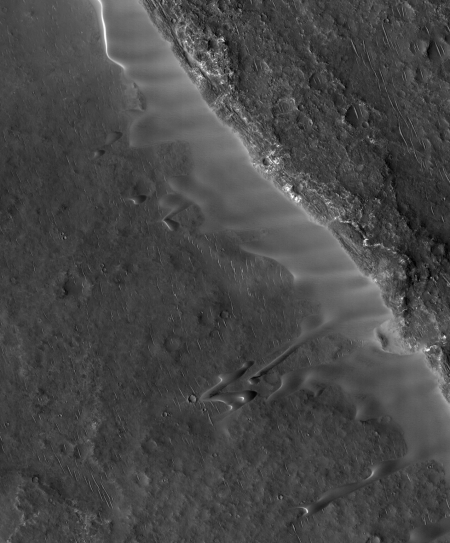 While on Earth such dunes form “extensive sand seas, linear dunes in nonpolar regions of Mars are rare.” The paper took a close look at multiple images of some these rare elongated dunes on Mars, taken over time, and found that they generally grew along their length, outward, parallel to the prevailing wind. Some were actively growing, some were not. Estimated ages ranged between 1,300 and 5,000 Earth years.

In the image above, as well as the wider shot of the same place to the right, the prevailing winds blow over that ridge, about 100 feet high, flow downward to hit the sand field nestled up against it, catch some of it and blow it outward to form the elongated dunes. As Davis explained, “The southwest side of the ridge is likely acting as a sand trap, where it is protected from the wind. The dunes then extent outwards from this field of sand.”

Imagine thick honey dripping down a shallow slope. Most of it might not move very much, but often a single drip might flow down, stopping when the supply of honey above peters out. In the case of these dunes, it isn’t gravity that is causing the flow, but the prevailing winds.

The wider shot however reveals some mysteries. For some reason the elongated dunes only occur in two specific spots. To the north we have the same ridgeline, the same field of sand sitting up against the ridge, but no elongated dunes. I asked Dr. Davis if there was an explanation for this. His wonderful answer, spoken like a true scientist:

I’m not sure, to be honest. It could be a number of factors due to winds, the availability of sand, or other conditions that make these particular locations ideal for dunes to nucleate.

One explanation that did occur to me (unproven of course) is that there might be a hollow in the ridge aligned with elongated dune, acting as funnel for wind and thus encouraging dune growth at just that point. 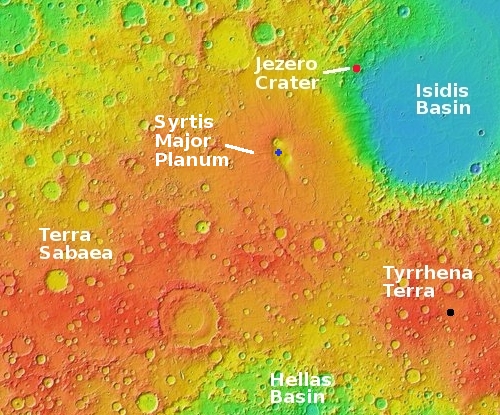 The location of these particular dunes on Mars, as shown by the blue cross in the overview map to the right, is interesting in itself. The dunes and ridge sit inside the caldera of one of Mars least dramatic looking shield volcanoes, Syrtis Major Planum, which ironically was the first documented surface feature identified on another planet, discovered by Christiaan Huygens during his observations of Mars in 1659.

This location, near to Jezero Crater where Perseverance will land in February 2021, is nestled between Isidis Basin, formed by a giant impact, and the dry and barren cratered highlands to the south. And like those highlands, I suspect that Syrtis Major is as dry and as barren. Unless someone discovers mineral resources here, the first colonizers of Mars will not come to this place first.