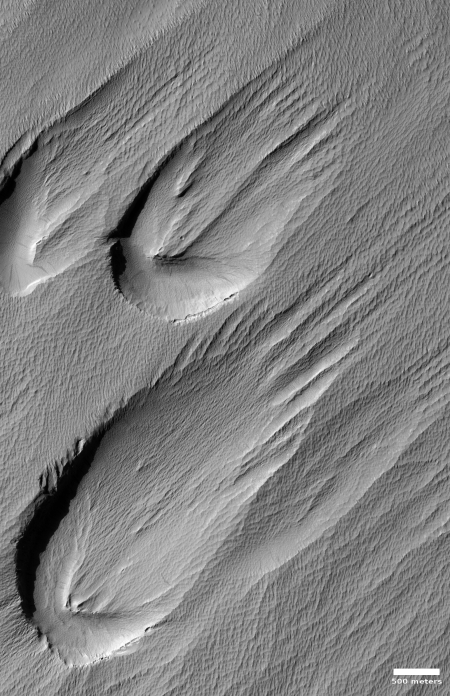 Cool image time! The photo to the right, rotated, cropped and reduced to post here, was taken on January 3, 2020 by the high resolution camera on Mars Reconnaissance Orbiter (MRO). It shows three strange teardrop-shaped depressions, clearly wind-swept and partly buried by dust and sand.

The location on Mars of these depressions is in the transition zone between the southern cratered highlands and the northern lowlands. This is also a region dubbed the Medusae Fossae Formation, a region where it appears a great deal of volcanic material was laid down during one or more eruptive events 3 to 3.8 billion years ago.

Whether these depressions were formed during those events is impossible to tell from the available data, especially because the underlying bedrock is buried in dust.

Their shape appears to have been caused as the wind slowly exposed three buried peaks of hard rock. The wind, blowing from the southwest to the northeast, would hit the peaks, producing an downward eddy that would churn out dust from the windward side. The wind and dust would then blow around the peaks, creating the teardrop tail on the leeward side to the northeast.