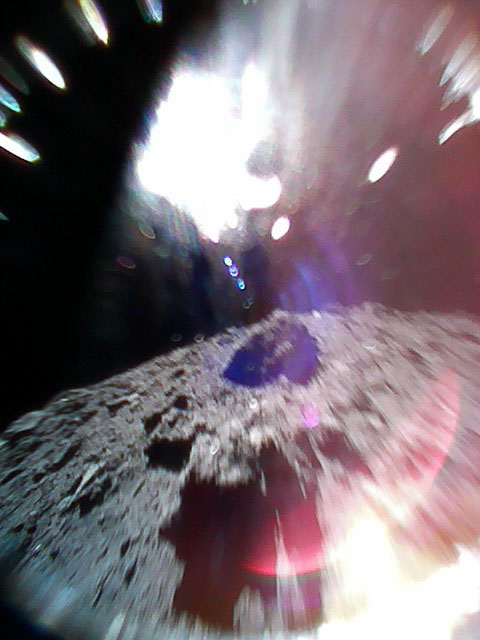 Super cool images! The two Minerva probes released two days ago from Hayabusa-2 have both sent back spectacular images from the surface of Ryugu.

The image on the right was captured by the rover dubbed 1A. I have rotated it to show the surface on the bottom, but the actual picture was taking during one of the rover’s bounces while it was moving, so the returned picture had the surface on left. The white brightness is from sunlight. From the press release:

We have confirmed both rovers landed on the surface of asteroid Ryugu. The two rovers are in good condition and are transmitting images and data. Analysis of this information confirmed that at least one of the rovers is moving on the asteroid surface.

Other released images were taken just after release. One shows a blurred picture of Hayabusa-2, while the other sees Ryugu’s surface below.

Both of these rovers are designed to travel on the surface by a series of hops, taking advantage of Ryugu’s tiny gravity. There will be more images I’m sure from them in the coming days.