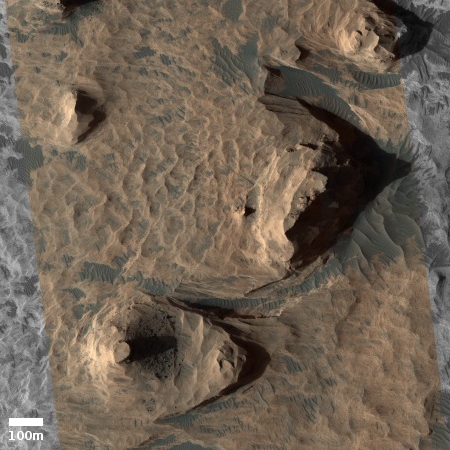 Today’s cool image is located near the Martian equator, in the middle of Arabia Terra, the most extensive region of the transition zone between the low northern plains and the southern cratered highlands. Taken on May 9, 2020 by the high resolution camera on Mars Reconnaissance Orbiter (MRO) and cropped to post here, the photo shows some layered mesas surrounded by a terraced and scalloped terrain with dust filling the low spots.

This is likely to be a very dry place on Mars. At only 2 degrees north of the equator, the evidence so far suggests that if there is a buried ice table (like the water table on Earth), it will be much deeper than at higher latitudes. The terrain reflects this, looking reminiscent of Monument Valley in the American southwest. In fact, the satellite image below, which I grabbed from MapQuest, shows a typical mesa in Monument Valley. 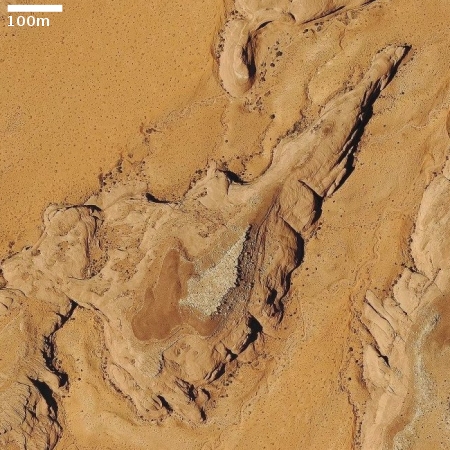 Shown at about the same scale as the martian photo above, the similarities are striking. Both have layers, tall mesas, and dry terrain. The differences are also important. The Earth mesas show evidence of water erosion by their softened edges as well as the dry streambeds along the big mesa’s edges. On Earth there are trees in those dry streambeds. Earth also has dust, but no scalloped terrain, at least none visible at this scale.

Ironically, the cause of the erosion that created these mesas in both places is possibly quite similar, wind in recent eons but possibly water/ice far in the past, when the entire planet’s climate was different. For Mars this remains a guess. 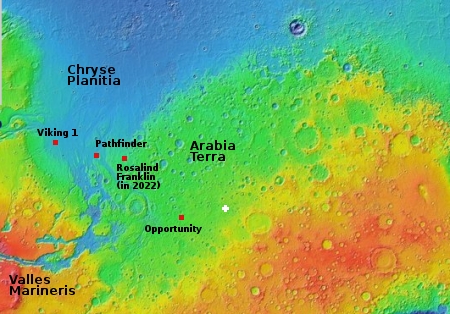 The overview map to the right gives the larger context. The white cross is the location of these mesas. Arabia Terra is the large green region east of Chryse Planitia and Valles Marineris.

My guess that this location is dry comes not only because it is at the equator. It is also quite far from the northern lowlands and is very close to the cratered highlands. If an intermittent ocean in the northern lowlands once lapped against Arabia Terra, its shoreline ebbing and flowing as the Martian climate changed, that shoreline would have been far to the north and west of this location. Water and ice might have once been here, but that was likely a very very long time ago.