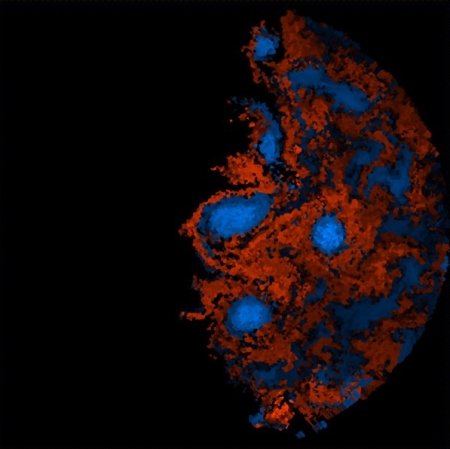 Cool image time! Citizen scientist Gerald Eichstädt has used images taken by Juno of Jupiter’s south polar storms to produce an animation that shows the evolution of those storms over a short time period.

The movie is more a computer model than an assemblage of images.

A fluid dynamical 2D model rotating with Jupiter’s System III rotation rate is started with a map of PJ19 (Juno’s 19th close approach) vorticity measurements of the south polar region between 75 and 90 degrees south (azimuthal, equidistant, planetocentric) as initial condition. The vorticity map is based on a sequence of PJ19 JunoCam images.

Relative vorticities are encoded in color, blue for cyclonic, orange for anticyclonic relative vorticity. The animated gif covers 48 hours, with one frame per real-time hour. Played with 25 fps, the result is a 90,000-fold time-lapsed animation.

I have embedded the animation below the fold. It is quite impressive.