Mysterious colors on Mars, near the landing site of Europe’s rover
January 19, 2021 10:17 am Robert Zimmerman 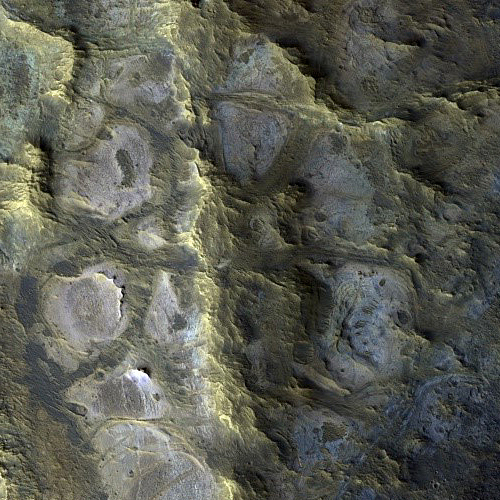 Cool image time! Today the science team for the high resolution camera on Mars Reconnaissance Orbiter (MRO) released a new captioned image, which I have cropped and reduced to post here to the right.

The photo was taken October 12, 2020, and shows a small very colorful area on top of an isolated hill. To quote the caption, written by Sharon Wilson:

An isolated, elongated mound (about 1 mile wide and 3.75 miles long) rises above the smooth, surrounding plains. Horizontal layers are exposed at the northern end of the mound, and its surface is characterized by a very unusual quasi-circular pattern with varying colors that likely reflect diverse mineral compositions.

…The origin of this mound is unknown, but its formation may be related to the clay-bearing rocks in the nearby Oxia Planum region. 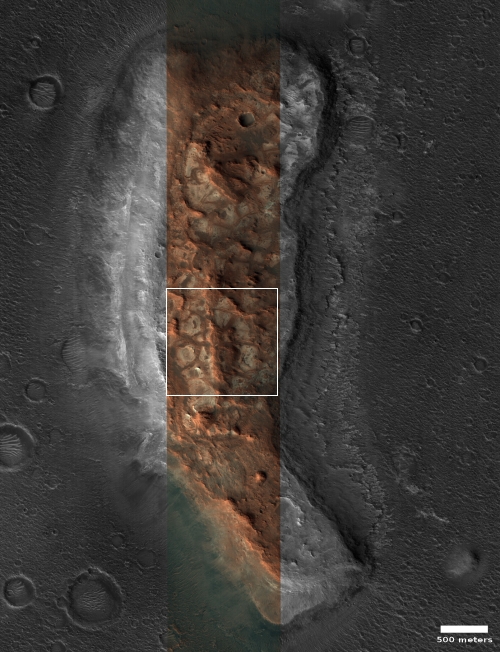 The photo is false color, combining wavelengths in red, blue, and the infrared. To the right is a section of the full image, showing the entire elongated mound. The white box marks the location of the section above. This second photo has been rotated, cropped, and reduced to post here. Its colors are different than the image above because it uses different color filters, the red, blue, and green bands, thus producing colors closer to natural light.

As the caption notes, scientists don’t know what formed this isolated mound. Nor do they yet know the full meaning of the colors, or the cause of the many strange features on this mound.

The latitude here is about 19 degrees north. The location itself on the lower edge of the transition zone between the low northern plains and the southern highlands. The yellow in the first image as well as the red in the second suggests dust and sand. You can also see sand dunes inside the nearby craters. This is likely a dry place. 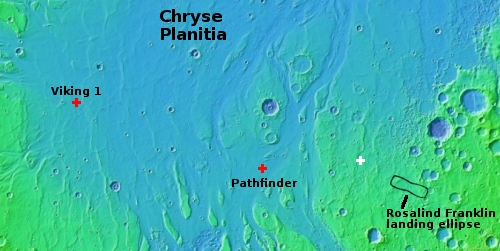 It is also near Oxia Planum, the targeted landing site of Europe’s Rosalind Franklin rover, now scheduled to launch to Mars in 2022. The overview map to the right shows the landing ellipse, with this photo’s location about 130 miles away from the center of that ellipse and marked by the white cross.

To the west are the locations where Viking 1 and Pathfinder landed, in 1976 and 1997 respectively.