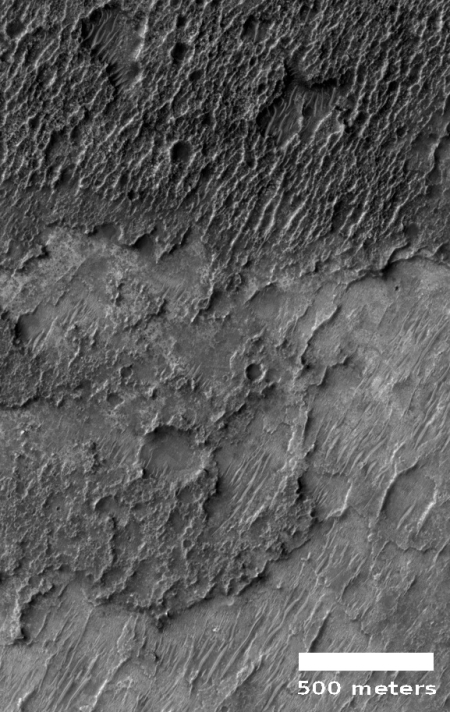 Cool image time! The picture on the right, cropped and reduced to post here, was part of the January image release from the high resolution camera of Mars Reconnaissance Orbiter (MRO). It shows an area in the Martian southern highlands where the surface suddenly gets darker, for no obvious reason.

The uncaptioned release image is titled “Dark-Toned Ridge at Junction with Dark-Toned Plain.” From the image itself it is hard to understand this title. In the full image the darkest terrain is a strip in the center, with slightly lighter dark terrain on either side, and the lightest terrain to the north or south. The photograph however does not show us how far this dark terrain extends to the west or east.

Two Mars Odyssey image strips of less resolution, here and here, show that this region is filled with several large patches of dark-tone surface. With this particular patch the center dark ridge is surrounded by that slightly lighter dark area.

MRO itself has not taken many images of this region, as shown in the overview image below. The red rectangles indicate MRO’s high resolution photographs, with this image indicated by the cross. At this low resolution this region seems somewhat nondescript. The Mars Odyssey image strips show that there many features here, but with little significant relief. 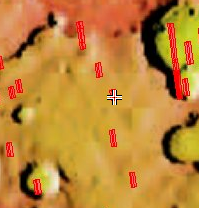 At high resolution there does not appear to be much difference between the darker and lighter areas. The lighter areas in general seem less rough and at a slightly lower elevation, but both areas are dominated by ridges and dunes trending southwest-to-northeast.

Why is this slightly higher region darker? Let’s assume that this darker material was a lava flow overlaying the surface. Over eons wind erosion, trending southwest-to-northwest, roughly eroded both it and the lower layers around it, leaving behind this rough corroded terrain. The different make-up of the darker material allows it to erode in a rougher manner.

While possibly correct, I would not bet much money on this guess. It is not clear it is lava. It is not clear that it is a flow. It does not explain why there are two areas of different darkness. And it certainly not clear what the make-up of any of this stuff is.

This is simply another cool mystery on the Martian surface.