NASA has picked Jezero Crater has the landing site for its as yet unnamed 2020 Mars rover.

Jezero Crater is located on the western edge of Isidis Planitia, a giant impact basin just north of the Martian equator. Western Isidis presents some of the oldest and most scientifically interesting landscapes Mars has to offer. Mission scientists believe the 28-mile-wide (45-kilometer) crater, once home to an ancient river delta, could have collected and preserved ancient organic molecules and other potential signs of microbial life from the water and sediments that flowed into the crater billions of years ago.

Jezero Crater’s ancient lake-delta system offers many promising sampling targets of at least five different kinds of rock, including clays and carbonates that have high potential to preserve signatures of past life. In addition, the material carried into the delta from a large watershed may contain a wide variety of minerals from inside and outside the crater.

The geologic diversity that makes Jezero so appealing to Mars 2020 scientists also makes it a challenge for the team’s entry, descent and landing (EDL) engineers. Along with the massive nearby river delta and small crater impacts, the site contains numerous boulders and rocks to the east, cliffs to the west, and depressions filled with aeolian bedforms (wind-derived ripples in sand that could trap a rover) in several locations.

The red dot on the map of Mars below shows this location. The blue dot is Gale Crater where Curiosity landed. The purple dot is the landing site for the European ExoMars rover. The yellow dot is where Opportunity has been roving, and the black dot is Spirit’s location. 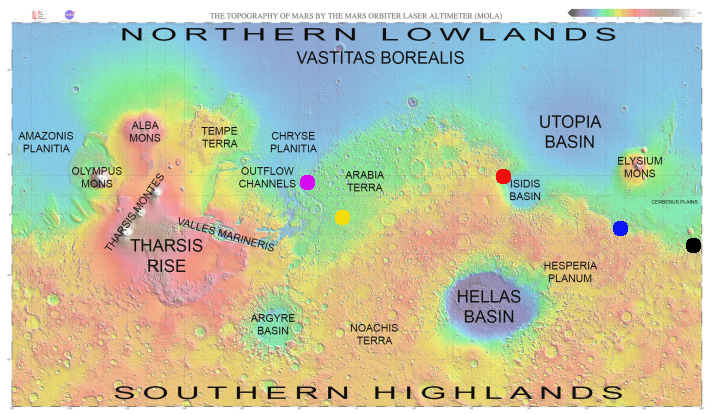 You might notice a pattern. The scientists are focused on that transition zone between the high elevation southern terrain and the low flat northern plains, where an intermittent ocean might have once existed. Their reasoning is sound, as they are more likely going to get a wider variety of geology here, with evidence of water in this region where shoreline features are often found.