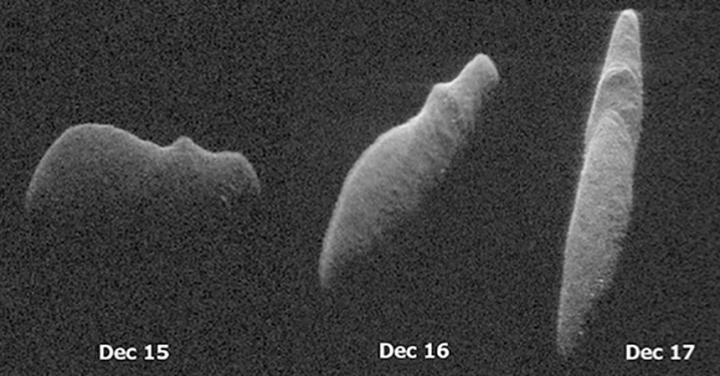 Cool radar images! The set of radar images above of near-Earth asteroid 2003 SD220 were created by combining radar data from three different radar telescopes on Earth, Arecibo in Puerto Rico, Green Bank in West Virginia, and Goldstone in California. As the press release notes:

The asteroid will fly safely past Earth on Saturday, Dec. 22, at a distance of about 1.8 million miles (2.9 million kilometers). This will be the asteroid’s closest approach in more than 400 years and the closest until 2070, when the asteroid will safely approach Earth slightly closer.

The radar images reveal an asteroid with a length of at least one mile (1.6 kilometers) and a shape similar to that of the exposed portion of a hippopotamus wading in a river.

The images have a resolution of 12 feet per pixel, so a close look should be able to reveal any large boulders, should they exist. Instead, I see a soft surface that to me resembles the surface of a sand dune, floating unattached to anything in space.