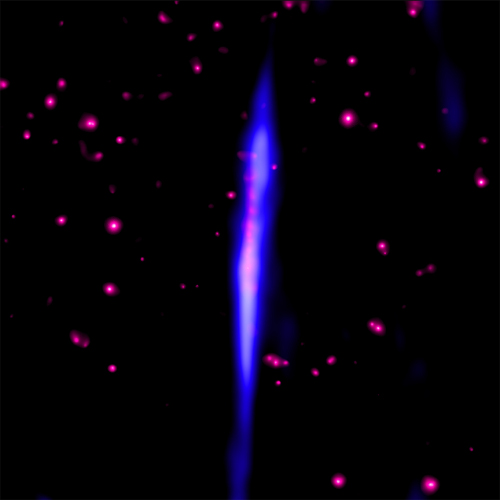 Scientists today released a spectacular panorama of the center of the Milky Way using X-ray data from the Chandra X-ray Observatory and radio data from the MeerKAT radio telescope in South Africa. The panorama reveals a complex web of magnetic field lines emanating out from the supermassive black hole at the center, Sagittarius A* (pronounced A-star).

Below the fold are reduced versions of the full panorama, unlabeled on the left and labeled on the right. The image to the right, reduced to post here, shows just one single example of those magnetic field lines, dubbed G0.17-0.41 and about 20 light years long. This particular filament is the subject of a paper just published in connection with the release of this panorama. From the press release.

A new study of the X-ray and radio properties of this thread by Q. Daniel Wang of the University of Massachusetts at Amherst suggests these features are bound together by thin strips of magnetic fields. This is similar to what was observed in a previously studied thread. (Both threads are labeled with red rectangles in the [full labeled panorama]. The newly studied one in the lower left, G0.17-0.41, is much farther away from the plane of the Galaxy.) Such strips may have formed when magnetic fields aligned in different directions, collided, and became twisted around each other in a process called magnetic reconnection. This is similar to the phenomenon that drives energetic particles away from the Sun and is responsible for the space weather that sometimes affects Earth.

The image below is fascinating to study because of the wealth of detail it includes, not only of magnetic filaments but of other nearby gas clouds and Sagittarius A* itself. 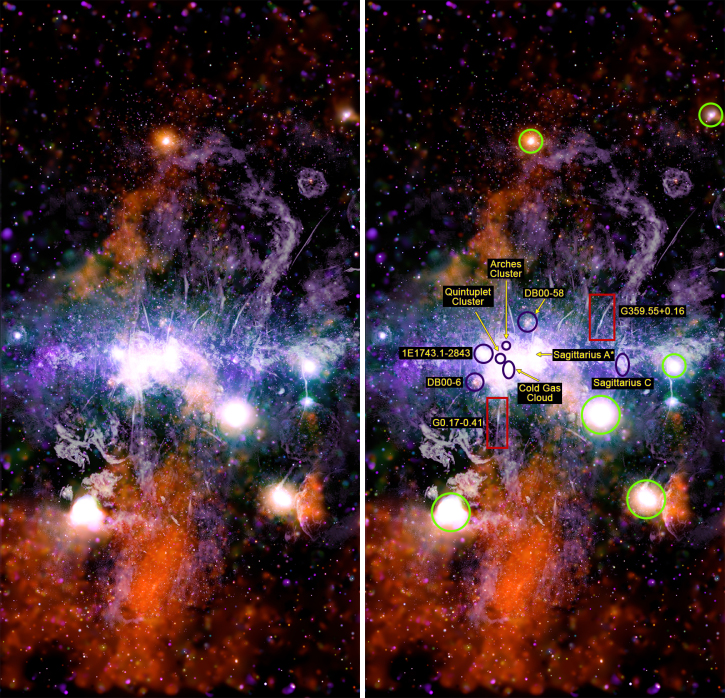