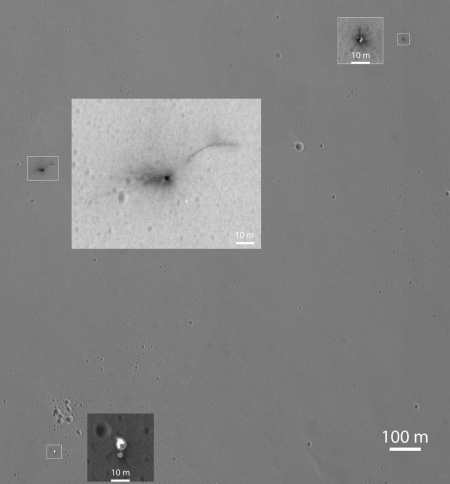 A new high resolution image from Mars Reconnaissance Orbiter’s HIRISE camera, reduced in resolution on the right, confirms that Schiaparelli crashed into the ground on October 19.

The scene shown by HiRISE includes three locations where hardware reached the ground. A dark, roughly circular feature is interpreted as where the lander itself struck. A pattern of rays extending from the circle suggests that a shallow crater was excavated by the impact, as expected given the premature engine shutdown. About 0.8 mile (1.4 kilometers) eastward, an object with several bright spots surrounded by darkened ground is likely the heat shield. About 0.8 mile (1.4 kilometers) south of the lander impact site, two features side-by-side are interpreted as the spacecraft’s parachute and the back shell to which the parachute was attached.

The center insert is a close-up of the impact site on the left, which clearly shows that the lander hit the ground hard, producing impact ejecta. That the rays are somewhat asymmetric also suggests that Schiaparellit hit the ground at an oblique angle.