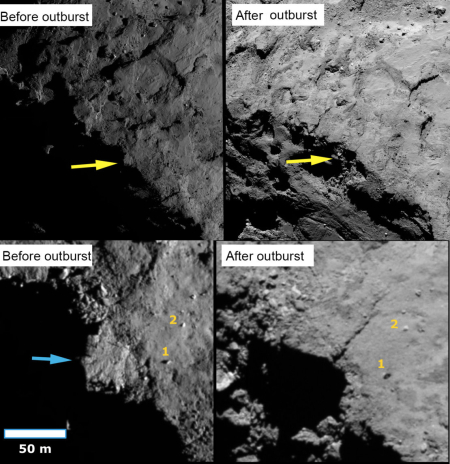 In reviewing the large image archive taken by Europe’s Rosetta probe while it orbited Comet 67P/C-G from 2014 to 2016, scientists have found more evidence of changes on its surface during its closest approach to the Sun, including a bouncing boulder and the collapse of large cliff.

The image on the right, reduced to post here, shows both wide (top) and close-up (bottom) views of the cliff collapse.

“This seems to be one of the largest cliff collapses we’ve seen on the comet during Rosetta’s lifetime, with an area of about 2000 square metres collapsing,” said Ramy, also speaking at EPSC-DPS today. … “Inspection of before and after images allow us to ascertain that the scarp was intact up until at least May 2015, for when we still have high enough resolution images in that region to see it,” says Graham, an undergraduate student working with Ramy to investigate Rosetta’s vast image archive.

“The location in this particularly active region increases the likelihood that the collapsing event is linked to the outburst that occurred in September 2015.”

These finds are only a sample of a number of similar discoveries since the end of the mission, as scientists pore through the more than 76,000 images in the Rosetta archive.