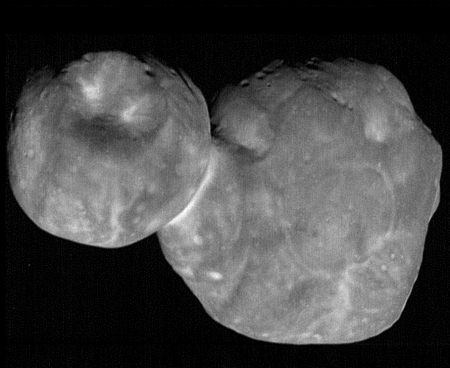 The New Horizons team has released new high resolution images of Ultima Thule, taken during its fly-by on January 1, 2019.

These new images of Ultima Thule – obtained by the telephoto Long-Range Reconnaissance Imager (LORRI) just 6½ minutes before New Horizons’ closest approach to the object (officially named 2014 MU69) at 12:33 a.m. EST on Jan. 1 – offer a resolution of about 110 feet (33 meters) per pixel.

…The higher resolution brings out a many surface features that weren’t readily apparent in earlier images. Among them are several bright, enigmatic, roughly circular patches of terrain. In addition, many small, dark pits near the terminator (the boundary between the sunlit and dark sides of the body) are better resolved. “Whether these features are craters produced by impactors, sublimation pits, collapse pits, or something entirely different, is being debated in our science team,” said John Spencer, deputy project scientist from SwRI.

Available at the link above is a three-second long movie they created from these images, showing Ultima Thule as it zips across the camera’s view.