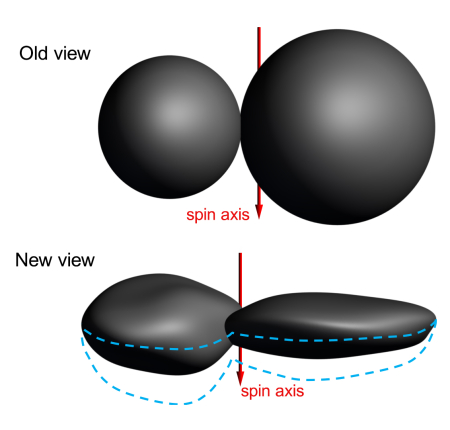 The New Horizons science team has released the last sequence of images taken by the spacecraft as flew away after its flyby.

The link has a nice video of that sequence. However, it is the information gleaned from this sequence that is most interesting.

The newly released images also contain important scientific information about the shape of Ultima Thule, which is turning out to be one of the major discoveries from the flyby.

The first close-up images of Ultima Thule – with its two distinct and, apparently, spherical segments – had observers calling it a “snowman.” However, more analysis of approach images and these new departure images have changed that view, in part by revealing an outline of the portion of the KBO that was not illuminated by the Sun, but could be “traced out” as it blocked the view to background stars.

Stringing 14 of these images into a short departure movie, New Horizons scientists can confirm that the two sections (or “lobes”) of Ultima Thule are not spherical. The larger lobe, nicknamed “Ultima,” more closely resembles a giant pancake and the smaller lobe, nicknamed “Thule,” is shaped like a dented walnut.

The image on the right shows their preliminary guess at Ultima Thule’s overall shape, as suggested by these new images.

The spacecraft has still not sent back the images it took during its closest approach, so there are likely more surprises coming.