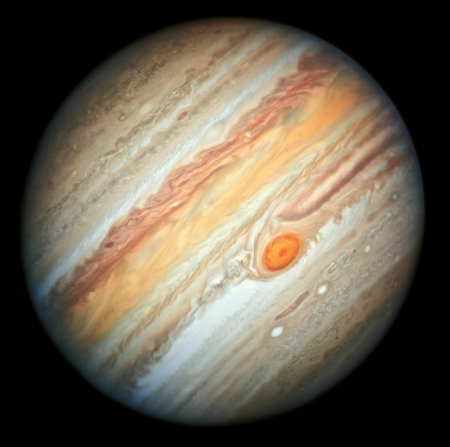 The Hubble science team today released a new global image the telescope took of Jupiter on June 27, 2019. The photograph on the right is that image, reduced and cropped to post here. As noted by the press release about the Great Red Spot,

The Great Red Spot is a towering structure shaped like a wedding cake, whose upper haze layer extends more than 3 miles (5 kilometers) higher than clouds in other areas. The gigantic structure, with a diameter slightly larger than Earth’s, is a high-pressure wind system called an anticyclone that has been slowly downsizing since the 1800s. The reason for this change in size is still unknown.

A worm-shaped feature located below the Great Red Spot is a cyclone, a vortex around a low-pressure area with winds spinning in the opposite direction from the Red Spot. Researchers have observed cyclones with a wide variety of different appearances across the planet. The two white oval-shaped features are anticyclones, like small versions of the Great Red Spot.

Another interesting detail is the color of the wide band at the equator. The bright orange color may be a sign that deeper clouds are starting to clear out, emphasizing red particles in the overlying haze.

In many ways Hubble’s images of Jupiter are comparable to those taken by Juno, except that Hubble can’t zoom in as close.