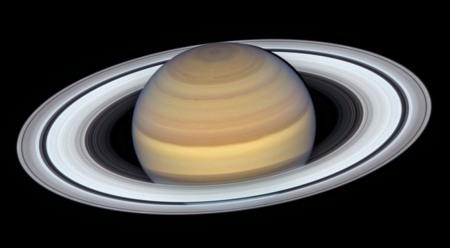 Astronomers have used the Hubble Space Telescope to snap a new high resolution image of Saturn. That image, cropped and reduced to post here, can be seen on the right.

The image was part of a new Hubble program to obtain regular images of the outer planets, begun in 2018.

[The Saturn images] reveal a planet with a turbulent, dynamic atmosphere. This year’s Hubble offering, for example, shows that a large storm visible in the 2018 Hubble image in the north polar region has vanished. Smaller storms pop into view like popcorn kernels popping in a microwave oven before disappearing just as quickly. Even the planet’s banded structure reveals subtle changes in color.

But the latest image shows plenty that hasn’t changed. The mysterious six-sided pattern, called the “hexagon,” still exists on the north pole. Caused by a high-speed jet stream, the hexagon was first discovered in 1981 by NASA’s Voyager 1 spacecraft.

As beautiful as this Hubble photograph is, I cannot help but be saddened by it. It is now the best image of Saturn we will get until 2036 at the earliest, when a NASA mission to Titan finally arrives.