New images from Mangalyaan
March 6, 2015 at 10:18 am Robert Zimmerman Points of Information 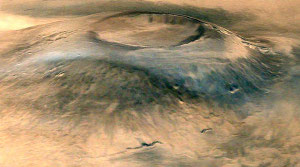 Indian scientists have released a new set of color images taken by their Mars orbiter, Mangalyaan.

The image on the right is of Arsia Mons, one of the three giant volcanoes to the east of Mars’ biggest volcano, Olympus Mons. Arsia Mons is important for future manned colonization, as there are known caves on its western flanks. In addition, those western flanks show solid evidence of past glaciers, which means that it is very likely that those caves will harbor significant quantities of water-ice, making settlement much easier.