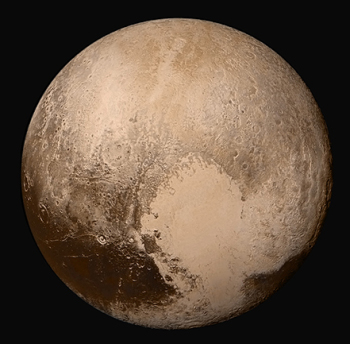 Cool image time! During today’s New Horizons’ press conference, principal investigator Alan Stern noted that only 4%-5% of the data has been recovered. They have finished first phase of download and are moving into second phase, which will be dominated by engineering and other data, not images. So, for the next couple of months they will only be able to release images once and awhile. Beginning in September images, however, they will begin downloading images at a much faster pace.

Some results from today:

The data set obtained so far suggests that Charon has practically no atmosphere.

As for Pluto’s atmosphere, they have gotten the first image of it, looking back at Pluto. From this they have found that the pressure of Pluto’s atmosphere at the surface is lower than expected. The atmosphere also has a haze layer, and there is an indication that the planet has weather. The haze is extensive, as much as 100 miles above the surface. This atmosphere appears to be made of ethylene and acetylene. This atmospheric surface pressure data suggests that the atmosphere has finally begun to condense after Pluto’s close approach to the Sun in 1989. Earth data had suggested it had been expanding since 1989, something scientists didn’t understand. The new data point suggest that the Earth data just wasn’t good enough, and that the atmosphere has been condensing as expected.

They think the dark equatorial areas are created by material rained down from the northern latitudes in a seasonal process. Tombaugh Regio however is a specific region that seems to be spewing out its own material and disturbing this latitude-determined weather pattern.

Higher resolution images of the nitrogen ice of the Regio near its rugged edges strongly suggest that it is flowing just like ice glaciers on Earth. The scientists explained that nitrogen, even at almost -400 degrees Fahrenheit, is soft and can flow. As Stern added, the interaction between geology and weather appears to be much greater on Pluto than on any other object seen in our solar system.