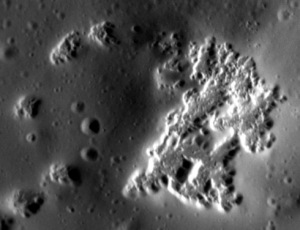 As Messenger nears the end of its lifespan orbiting Mercury, the project scientists have put together a slate of talks on what they have learned, presented today at the 46th annual Lunar and Planetary Science Conference in Houston.

The images that go with these presentations can be found here.

The image on the right is a close-up of the mysterious and unexpected hollows that Messenger found scattered everywhere on Mercury’s surface. According to today’s presentation, scientists now believe they are very recent features, formed when material with a lower boiling point evaporated away because of Mercury’s harsh and very hot environment. Imagine for example a vein of dry ice in a rock crack. The temperature rises above freezing and the dry ice evaporates. And like the convection bubbles in tomato sauce as it simmers, some of that evaporation pushes its way up by popping out a bubble and leaving behind a hollow.

In the case of Mercury the material is likely not dry ice, though scientists as yet are unsure what it is.

They are also presenting talks on magnesium on Mercury, the planet’s many scarps, and detailed observations of the permanently shadowed polar craters that might have water-ice in them.