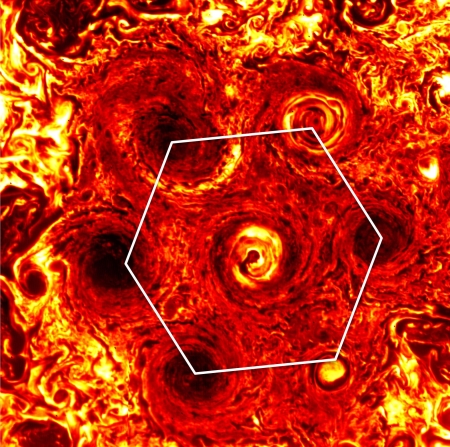 New images from Juno have revealed the formation of a new Texas-sized cyclone joining the circle of storms around Jupiter’s south pole.

In the infrared Juno image to the right, the new storm is the small bright cyclone in the lower right.

[D]uring Juno’s 22nd science pass [on November 3], a new, smaller cyclone churned to life and joined the fray. “Data from Juno’s Jovian Infrared Auroral Mapper [JIRAM] instrument indicates we went from a pentagon of cyclones surrounding one at the center to a hexagonal arrangement,” said Alessandro Mura, a Juno co-investigator at the National Institute for Astrophysics in Rome. “This new addition is smaller in stature than its six more established cyclonic brothers: It’s about the size of Texas. Maybe JIRAM data from future flybys will show the cyclone growing to the same size as its neighbors.”

Probing the weather layer down to 30 to 45 miles (50 to 70 kilometers) below Jupiter’s cloud tops, JIRAM captures infrared light emerging from deep inside Jupiter. Its data indicate wind speeds of the new cyclone average 225 mph (362 kph) – comparable to the velocity found in its six more established polar colleagues.

Because of Juno’s orbit we do not get continuous views of the gas giant’s cloud-tops, so we can’t see the moment-by-moment evolution of these storms, which makes it impossible to obtain a full understanding of their formation or disappearance. Even then it will likely take centuries of observations to even begin to get a fuller understanding of the meteorology of Jupiter.