New study: Lockdowns & masks are useless and might even increase COVID-19 spread
November 16, 2020 12:03 am Robert Zimmerman

A recently completed research study by Icahn School of Medicine at Mount Sinai in cooperation with the Naval Medical Research Center and published in the New England Journal of Medicine has found that strict quarantine, tightly controlled social distancing, and continuous use of masks did absolutely nothing to contain the spread of COVID-19, and might even have increased its spread.

First, the study used 1,843 Marine volunteers, individuals well trained to follow orders as well as the required procedures. Second, their quarantine took place at Marine facility under the supervision of the military. Both factors meant that the volunteers were going to follow procedures much more correctly than the general public.

Third, no one could enter the study without undergoing 14-days of quarantine beforehand, plus a test to prove they were negative of COVID-19 at the study’s start. The study itself was held in a tightly controlled quarantine campus run by the Marines.

The volunteers then had to follow this incredibly strict quarantine regiment:

All recruits wore double-layered cloth masks at all times indoors and outdoors, except when sleeping or eating; practiced social distancing of at least 6 feet; were not allowed to leave campus; did not have access to personal electronics and other items that might contribute to surface transmission; and routinely washed their hands. They slept in double-occupancy rooms with sinks, ate in shared dining facilities, and used shared bathrooms. All recruits cleaned their rooms daily, sanitized bathrooms after each use with bleach wipes, and ate preplated meals in a dining hall that was cleaned with bleach after each platoon had eaten. Most instruction and exercises were conducted outdoors. All movement of recruits was supervised, and unidirectional flow was implemented, with designated building entry and exit points to minimize contact among persons. All recruits, regardless of participation in the study, underwent daily temperature and symptom screening. Six instructors who were assigned to each platoon worked in 8-hour shifts and enforced the quarantine measures. If recruits reported any signs or symptoms consistent with Covid-19, they reported to sick call, underwent rapid qPCR testing for SARS-CoV-2, and were placed in isolation pending the results of testing.

Instructors were also restricted to campus, were required to wear masks, were provided with preplated meals, and underwent daily temperature checks and symptom screening. Instructors who were assigned to a platoon in which a positive case was diagnosed underwent rapid qPCR testing for SARS-CoV-2, and, if the result was positive, the instructor was removed from duty. Recruits and instructors were prohibited from interacting with campus support staff, such as janitorial and food-service personnel. After each class completed quarantine, a deep bleach cleaning of surfaces was performed in the bathrooms, showers, bedrooms, and hallways in the dormitories, and the dormitory remained unoccupied for at least 72 hours before reoccupancy.

The result? The virus still spread through this population. As they noted in the paper:

Epidemiologic analysis supported multiple local transmission events, including transmission between roommates and among recruits within the same platoon.

None of these strict lock down mandates, including continuous mask use, did anything to prevent transmission. 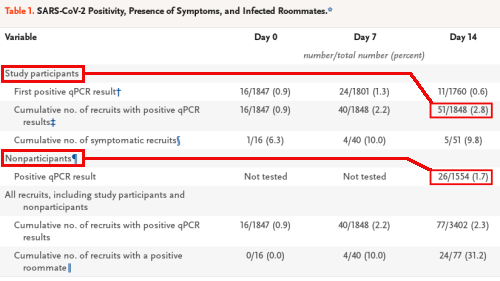 More significantly, the control group of Marines who did not participate in this study, and thus were not under the same strict lock down rules, actually saw fewer infections, as shown on the table from the study to the right. While the difference wasn’t very large, it existed nonetheless. One could argue that the overuse of masks probably contributed to the higher numbers in the study group, since even in this tightly controlled setting it is still impossible to expect people to wear masks properly. Even if they replaced them regularly, it is unrealistic to expect people to never touch them while they wear them. Over long periods the masks will become havens for the virus, where the person breathes.

The study also demonstrated once again the relative harmlessness of the disease. Almost all of these young healthy Marine recruits who tested positive were asymptomatic, meaning that they wouldn’t have even known they were infected if they had not been participating. Furthermore, it appears no one even got very sick.

Once again, this data continues to reinforce the very very early data from March. COVID-19 is not dangerous to the young or healthy, and it will spread no matter what you do. The best way to beat it and thus protect the vulnerable older and sick population is to have it spread as fast as possible through the young and healthy population, so that it will die out quickly and thus no longer be a threat.

This is how humans have handled these respiratory diseases since time immemorial. Darwin’s rules made us do it that way, with good results. Too bad our bankrupt political leaders and health officials have decided to abandon these well-proven practices. The result has not only been more COVID-19 deaths, but more deaths overall, from the bad consequences of economic loss, depression, reduced medical treatment available for other illnesses, and numerous other issues caused by the lock downs, not the virus..

Sadly, I fully expect that our fans of lock downs and masks will either refuse to read this study, or if they do, will find any excuse to dismiss it.