No plans to shoot down Long March 5B booster; revised prediction
May 6, 2021 5:34 pm Robert Zimmerman

The Biden administration will make no attempt to shoot down the 21-ton core stage of China’s Long March 5B rocket, according to the Defense secretary Lloyd Austin:

At this point we don’t have a plan to shoot the rocket down. We’re hopeful it will land in a place where it won’t harm anyone. Hopefully in the ocean or someplace like that. I think this speaks to the fact that for those of us who operate in the space domain that there should be a requirement to operate in a safe and thoughtful mode and make sure that we take those kinds of things into consideration as we plan and conduct operations.

Meanwhile, the predicted reentry window has shrunk again, to 16 hours, and shifted so that its centerpoint is now over Egypt, as shown on this map by the Aerospace Corporation: 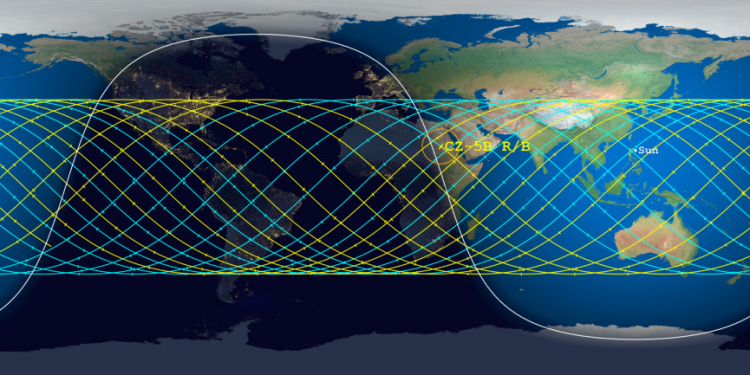 The blue tracks indicate the stage’s path before that centerpoint, the yellow tracks after. The tick marks show 5 minute intervals. Thus, if it comes down just 8 minutes early it lands in Spain. Twenty-five minutes early puts it in Florida.

If it comes down one hour later than this centerpoint it will be crossing over the continental U.S.