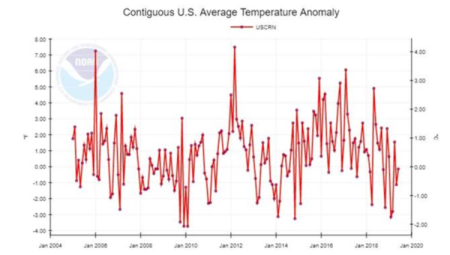 Using temperature stations specifically picked to eliminate as many biases and temperature errors as possible, NOAA has found that since 2005 the continental United States has experienced no warming at all.

The graph at the right, reduced to post here, illustrates this.

The USCRN has eliminated the need to rely on, and adjust the data from, outdated temperature stations. Strikingly, as shown in the graph below, USCRN temperature stations show no warming since 2005 when the network went online. If anything, U.S. temperatures are now slightly cooler than they were 14 years ago.

What is significant about this data is how it reveals the dishonesty of the adjustments that NOAA and NASA have been making to the temperature data. Those adjustments, supposedly done to make the data more accurate, have always cooled the past and warmed the present, a pattern that by itself is very suspicious.

These temperature stations were chosen to create a reliable baseline, picking stations that needed no adjustment and would thus give scientists a measure for justifying any alterations they impose on the raw data. Not only does this data suggest strongly that the claims of global warming year after year (“This year was the hottest on record!”) are suspect, it also shows that there is something seriously wrong with their adjustments. If their modifications to the raw data was correct, then this set of data should have matched it. It does not.

Will this mean they will readjust the overall data to eliminate the cooling in the past and the warming in the near present to make the data better fit what these results prove? Don’t be silly! That would show that there is little merit to the theories of the global warming alarmists, something that cannot be tolerated. It might cause those big government contracts to be cancelled. Worse, it will make it more difficult for these leftists to use the data to justify reshaping society into their vision of a socialist utopia.

No, what I expect to happen is that the scientists at NOAA (who also happen to be the ones who have been tampering with all the other data) to begin altering the temperature data from these baseline stations, to make them fit their theories. Or as Democratic presidential candidate Joe Biden recently put it, “We choose truth over facts.”