Oblique close-up image of Ceres
January 24, 2019 at 9:50 am Robert Zimmerman Points of Information 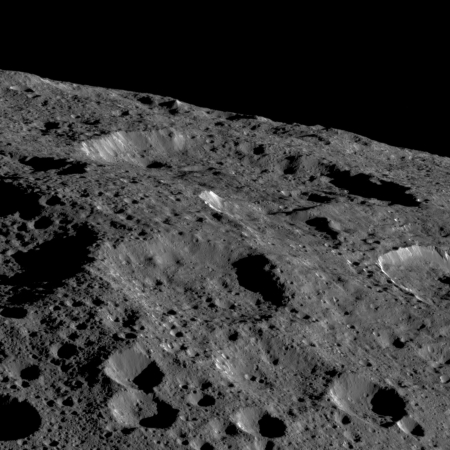 The Dawn science team has released an oblique close-up image of Ceres, taken in May 2018 before the Dawn mission ended. To the right is a reduced resolution version, with the full resolution photograph viewable if you click on it.

Dawn captured this view on May 19, 2018. The image shows the limb of Ceres at about 270E, 30N looking south. The spatial resolution is about 200 feet (60 meters) per pixel in the nearest parts of the image. The impact crater to the right (only partially visible) is Ninsar, named after a Sumerian goddess of plants and vegetation. It is about 25 miles (40 kilometers) in diameter.

Bright seeps running down the interior rims of several craters are visible. To my eye, the image also suggests an overall softness to Ceres. Its surface is like a sandbox, easily reshaped significantly by each impact.