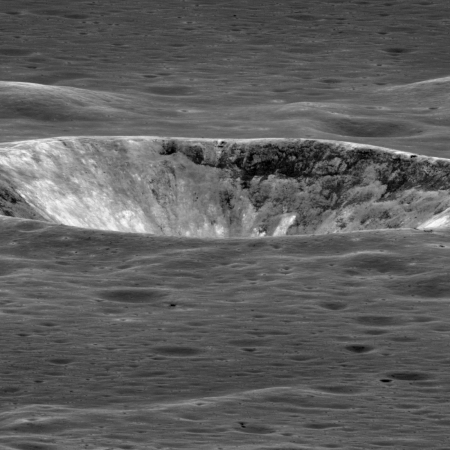 Cool image time! The Lunar Reconnaissance Orbiter (LRO) science team this week released an image showing Wallach Crater as seen from the side. The image on the right is a section of that image and has been reduced to show here. The full image of 3.5-mile-wide crater and its surrounding terrain can be explored at the link. From the link:

Wallach crater (4.89°N, 32.27°E) formed within a thin layer of black basaltic lava flows that overlie much brighter anorthositic material. Think of a white cake with chocolate icing. When the asteroid (or comet) impacted this “iced cake”, ejecta from deeper portions (white cake, or rather brighter anorthosite) was thrown out onto the icing (darker basalt) resulting in intermediate tones where the two materials mixed.

The dark streaks seen inside the crater are blocks of the icing (basalt) breaking off and creeping down slope. The fact that the deepest material lands on top of the shallowest material (known as inverted stratigraphy) was first described by Gene Shoemaker from his pioneering observations at Meteor Crater, Arizona. This effect simplifies sampling the local geology in three dimensions. As an astronaut traverses towards the rim of a crater, the rocks underfoot come from deeper and deeper within the crater. The rocks at the rim are from the deepest portions of the crater!

It is especially interesting to use the viewer at the link to see the surrounding terrain, which includes two other craters that are far less distinct.