Occator Crater on Ceres
October 1, 2018 at 9:14 am Robert Zimmerman Points of Information 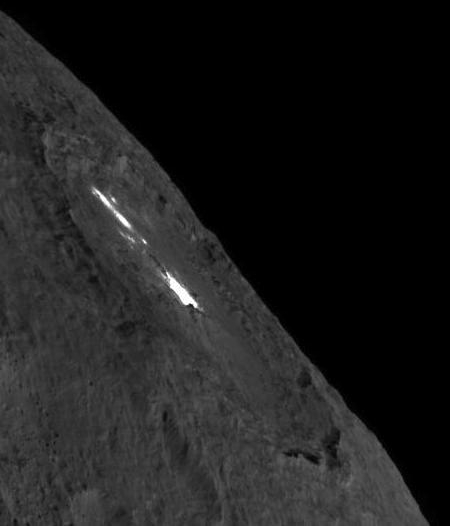 Cool image time! As Dawn’s long and successful mission to the asteroids Vesta and Ceres winds down, the spacecraft is taking a slew of spectacular close-up images of Ceres. The image on the right, cropped slightly to post here, is an oblique view of Occator Crater, home to the double bright spots that scientists now believe are caused by the upward seepage of a water-based brine from the interior.

The image was taken August 14, 2018 from a distance of 1149 miles. It clearly shows how the bright spots are depressions, not raised features. Additional images released this week of the floor of the crater capture a complex fracture network (seen here and here) with some fractures apparently quite deep.

All this suggests that the surface crust of Ceres is not very structurally strong, allowing a churning process that plows material up and down. The data also suggests that even on a small planetary body like Ceres the geological processes are going to be complex and often on-going, depending on material, energy, and the size of the body.