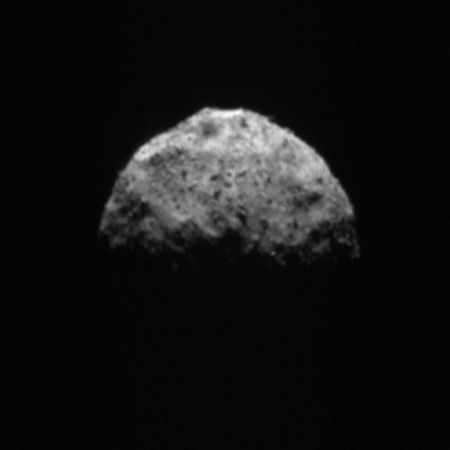 The science team for OSIRIS-REx released today the first picture taken as the spacecraft begins its last approach of the asteroid Bennu. To the right is that picture, cropped and expanded to post here. From the caption:

This image shows a top-down view of asteroid Bennu, with a portion of the asteroid’s equatorial ridge and northern hemisphere illuminated. It was taken by the PolyCam camera on NASA’s OSIRIS-REx spacecraft on March 4, from a distance of about 186 miles (300 km). The spacecraft’s cameras are pointed directly at Bennu’s north pole. Two large equatorial craters are visible on the asteroid’s edge (center and center left).

If all goes well, the probe will fly past the asteroid on April 7th, obtaining high resolution images of its entire surface as it rotates below, including very close-up images of the Nightingale sample grab location during its closest approach.