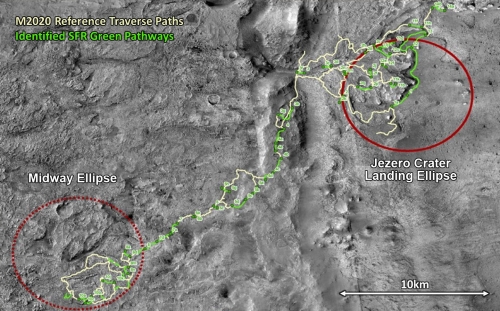 In touting the plans of NASA and the European Space Agency (ESA) to someday launch a rover to Jezero Crater designed to pick up the cached samples that Perseverance is going to leave behind, NASA today published the map to the right, showing Perseverance’s planned driving routes in the crater, on the large delta that poured into the crater in the past, and beyond that crater.

The planned route looks like they will spend a lot of time exploring the top of delta, then will move out of the crater and to the southwest towards what had been another candidate landing site for Perseverance, now dubbed the Midway ellipse.

What route the science team will eventually take at the delta depends greatly on exactly where Perseverance lands today. We will know more in only a few hours.