Plato Crater on the Moon
January 25, 2019 at 11:47 am Robert Zimmerman Points of Information 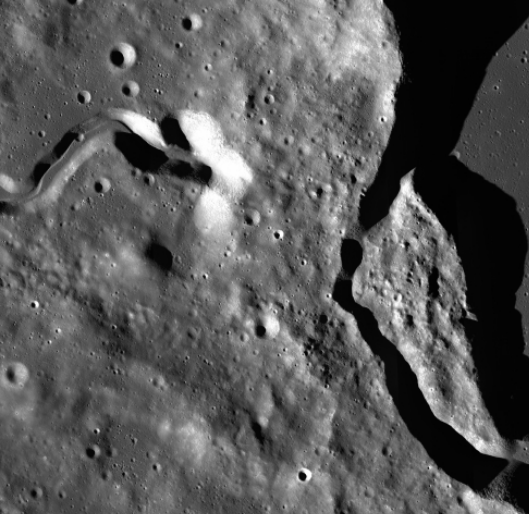 Cool image time! The Lunar Reconnaissance Orbiter (LRO) science team this week released a new high resolution image of the western rim of 63-mile-wide Plato Crater, located near the visible edge of the Moon’s near side. On the right is a slightly reduced version cropped to show the area of most interest.

Plato crater is prominent, yet from our vantage point on Earth we never truly see it as it is. That’s because it is located far enough north of the lunar equator (center latitude 51.62°N, center longitude 350.62°E) on the curving surface of the spherical Moon that it appears foreshortened. Plato is round like most other impact craters, but from Earth we see it as an oval aligned east to west.

A dark floor makes 101-kilometer-wide Plato crater stand out against a light-colored lunar highlands background. Plato crater is also prominent by association; the crater is located just north of 1145-kilometer-wide Mare Imbrium. A small part of this mare is visible at lower left in our Featured Image. Mare Imbrium is made up of many basalt layers laid down by violent volcanic episodes over a span of about 1.5 billion years. The basalts fill the Imbrium Basin, which a large asteroid or comet impact excavated about 3.85 billion years ago. When we look at a bright full Moon, round dark Mare Imbrium captures our gaze, then we see Plato crater, which is estimated to be about a hundred million years younger than the Imbrium Basin.

The western rim of Plato crater — visible on the east (right) side of our Featured Image — includes a 23.4-kilometer-wide slump block. The roughly triangular piece of rim broke free when an asteroid impact excavated Plato crater. Its eastern edge stands up to 1.4 kilometers above the crater’s dark floor. Part of the floor is visible in the image just above right center, east of the long shadow of the rim. [emphasis mine]

That block is thus 14.5 miles wide, and almost a mile high. I am trying to imagine what it was like when it broke off the rim and fell eastward into the crater floor. I am having trouble doing so.

Below is a image of the entire crater, with the area of the image above indicated by a white box. It shows clearly how this crater splashed into the basalt lava plain of Mare Imbrium. 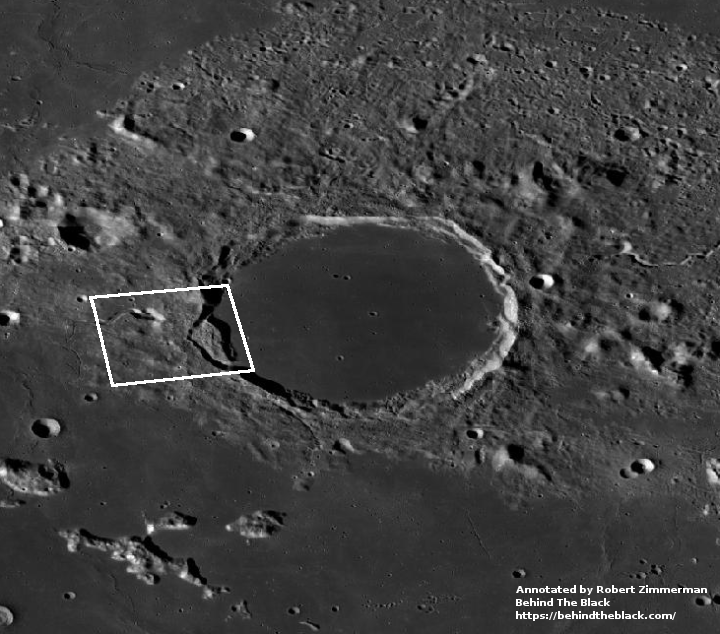 The asymmetrical pattern of debris surrounding the crater, mostly to the northeast, suggests the impact came from the southwest. The crater’s smooth floor also suggests that it caused the basalt in the mare to melt into a smooth pond of lava, which then solidified. The pit and rill to the west of the rim could have formed from lava drainage out of the crater and down into Mare Imbrium, though this is only a theory.

If you go to the link above, you can zoom into this image close enough to see individual boulders only tens of feet across.