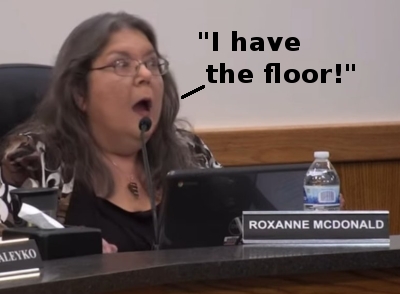 School board president Roxanne McDonald,
thinking she is in charge.

Bring a gun to a knife fight: A school board meeting in Dearborn, Michigan, had to be shut down when a mostly Muslim crowd of parents (with some Christians as well) became outraged by what appeared to be resistance by the school board to their demand that various books advocating the queer agenda be removed from the public school libraries.

As the meeting progressed, interruptions from the crowd became louder and increasingly frequent, despite calls from board members for decorum and respecting the right of others to speak.

Chants of “vote them out,” broke out when school board president Roxanne McDonald said a three-minute limit per speaker would be strictly enforced. The room was also far over its occupancy limit, and after the crowd ignored multiple orders for people to move into two overflow rooms, board members ended the meeting prior to the public comment period.

The video below shows the situation leading up to the board shutting down the meeting. Watch it and tell me if you do not think board president Roxanne McDonald is a self-righteous petty dictator who has utter contempt for the parents who are there.


Apparently the parents were mostly protesting the board’s policy for removing books that parents objected to. The policy allows anyone to request a removal, but it had previously left the decision up to the school’s staff. Due to rising complaints — probably because the schools were routinely dismissing parental objections — that policy had been revised allowing an appeal by the parents to “a committee comprised of community, parents, staff members, and students.”

This did not satisfy the parents, for good reason. Such a committee is a typical tactic of the left to block any protest to its policies. It seeds such committees with its allies (some innocent, some not) and almost always gets a decision it wants.

When no one in the crowd was willing to move into the overflow rooms, the board closed the meeting, citing fire marshal demands. It also claimed it would reconvene the meeting in a larger venue at a later date. It should not expect things to go much better then, based on its present actions.

Several points: First, this protest is another indication that parents of all stripes in America have had enough, and are no longer willing to go along with the college-educated leftists who have dominated politics at all levels, from school boards to the swamp in Washington, since the 1960s. There is an anger rising in the land, because that out-of-touch elitist community has finally chosen the wrong target to warp and destroy, the children of ordinary people.

Second, Dearborn’s Muslim population is large, and in fact it is one of the most Islamic cities in the United States. Such a population will not tolerate the queer agenda for more than two seconds, and it will be this issue that will quickly cause both Muslim and Christian parents to work together as allies.

Third, because of the domination of Islam in Dearborn, a victory here against the queer agenda in the schools will in some ways be a Pyrrhic victory for traditional American civilization. Islam’s goal is not merely religious, but political. It does not believe in the separation of church and state, but is designed to bring them together, under Islamic rule. While American Christians merely wish to get the schools focused only on reading, writing, and arithmetic, the leaders in the Islamic community will undoubtedly be thinking about a complete take over, at all political, cultural, and religious levels. We must be aware of this fact.

Third, the chant “Vote them out!” that closed the meeting is not merely a chant, it is a clear prediction. When next this school board comes up for election expect the large Muslim community of Dearborn to run its own slate, and expect that slate to win handily. Expect that victory to force major changes in the curriculum at the city’s public schools, including if necessary the removal of many administrators and staff.

For at least the short term, the focus of teaching in Dearborn’s public schools will return to the basics. And that is something we must celebrate.