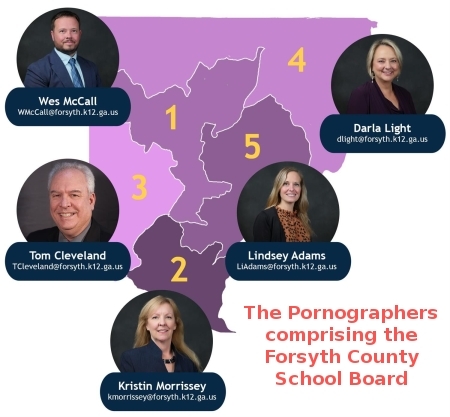 Bring a gun to a knife fight: The five elected members of the Forsyth County Board of Education in Georgia have now been sued for the repeated censoring of parents during their open comment period because the parents wished to read pornographic excerpts from books that school board had approved for use in school libraries.

The suit was filed by the Institute for Free Speech (IFS) for two parents, Alison Hair and Cindy Martin, as well as the independent parents organization called Mama Bears of Forsyth County.

Multiple district residents, including Mama Bears members and plaintiffs in the lawsuit Alison Hair and Cindy Martin, have used their time to read aloud from school library books they consider pornographic. Yet while these materials are available to kids in school, the Chair has cut off and banned speakers who read from them at Board meetings when he deems the language inappropriate or profane.

This catch-22 robs parents of the ability to confront board members with the very language they themselves consider inappropriate for children, such as graphic descriptions of sex acts. After plaintiff Alison Hair attempted to read one such passage at a March 15 board meeting, she received a letter signed by every member of the Board of Education prohibiting her from participating in any future meetings until she provides a written guarantee that she will abide by the Chair’s directives. The Board, however, cannot require that citizens sacrifice their First Amendment rights as a precondition for participating in meetings, the lawsuit explains. [emphasis mine]

You can read the complaint here [pdf]. The facts of the case are very clear: the board members, led by board chairman Wesley McCall, have been abusing their power to silence any criticism. They are also doing whatever they can to prevent parents from revealing the queer and obscene content contained in school library books that the board members have approved for children, as well as creating rules that make removing these books practically impossible. From the complaint:

Mama Bears members spend many hours every week researching the educational materials available to their children through the classrooms, curriculums, and libraries of FCS [Forsyth County Schools]. They began to do so after they discovered that pornographic books in the FCS libraries were readily available to their children. They found the contents of these books to be shocking. This motivated them to advocate for these books’ removal from the schools.

Mama Bears members, including the individual plaintiffs, have challenged the presence of books found in FCS schools through a process called a “book challenge.” A “book challenge” commences when an individual sends a Media Center Materials Appeal Form to the school. The school passes the appeal form to a committee which then has 45 days per book to complete a review. Under the book challenge policy, only one book may be reviewed at a time in any individual school.

The Mama Bears have identified over one hundred books they believe are inappropriate. To have all of these books reviewed through a challenge under this procedure would take between seventy to twenty-five years, assuming no new books were added. Challenged books are still available to children during the challenge’s pendency. [emphasis mine]

The lawsuit claims the board is violating the parents rights under the First and Fourteenth Amendments of the Constitution, and demands “nominal damages; declaratory and preliminary and permanent injunctive relief against continued enforcement and maintenance of Defendants’ unconstitutional customs, policies, and practices; and attorney fees and expenses.” As this is the same non-profit legal firm that won an almost identical case in Pennsylvania, those nominal damages are the same, $17.91 per individual, a number matching the year the First Amendment was ratified.

This board is going to lose big, not only in court. First, while the nominal damages are tiny, the court costs are going to be expensive. Second, in November two seats are up for re-election, with Chairman Wesley McCall trying for re-election. Though he claims to be a Republican, that is irrelevant. His Democratic Party opponent should win big. Expect other members of this board to slowly vanish in future elections.

And if not, the contact information for each board member can be found here. It might be good if more members of the general public in Forsyth county let these board members know that pushing pornography on little children is not acceptable, nor is violating the rights of parents when they attempt to protest this vile policy at board meetings.